Falling satellite due to hit Friday 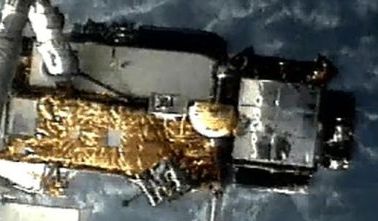 A 20-year-old NASA satellite the size of a bus that is heading for Earth is expected to hit tomorrow.

NASA and the US Department of Defense are tracking the 35ft spacecraft, the Upper Atmosphere Research Satellite, or (UARS), as it rushes towards the planet at eight kilometres per second.

Experts say there is a one-in-3200 risk of the six-ton space junk hitting someone – considerably greater than the chances of winning Lotto, at just one in 3.8 million.

Although there will only be a 20-minute warning before it strikes, NASA spokespeople have stressed that the risk to human life and property from UARS is small.

NASA said in 50 years of space exploration no one has ever been hurt by falling space junk, while they claimed that people were much more likely to be fatally struck by lightning.

The 20-year-old Upper Research Atmosphere Satellite will be the biggest NASA spacecraft to fall uncontrolled from the sky in 32 years.

The giant satellite is expected to break into more than 100 pieces as it enters the atmosphere, with most of it burning up.

Debris is expected to scatter over an area 800 kilometres long, with the biggest chunk weighing about 140 kg.

The anticipated landing area spans cities as far north as Edinburgh and as far south as Cape Horn, on the southern coast of South America – though given more than three-quarters of the earth is covered in water, NASA is expecting a splash-down, rather than a smack-down.

About a week ago the NASA was saying satellite re-entry this coming Saturday(NZST) as reported nationally in NZ which presumably more likely to be Friday US time – remember 9/11 it was 9/12 NZST.

Hi Peter – apparently the uncertainty is because it could fall on either Friday NZT or Frday UST!  This story came from the Herald and AP around 6pm yesterday – will try and source something new for an updated time.

This is a link to a Fox News article that contains a link to their live satellite tracker you might like to observe the satellite UARS as it falls.  Currently it seems to be over New Plymouth NZ.

I just read on twitter that it is coming down near Aussie – have you heard about that?