Fairly settled this coming Mon to Fri, fronts to start and end the week however 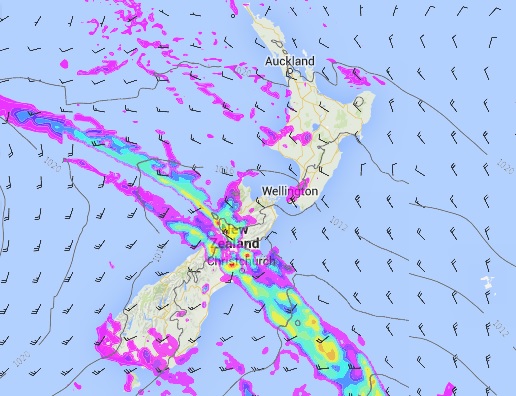 So to start the second week of February we have a front which moves northwards over the South Island during the day then onto the North Island overnight, the front weakens as it moves north so for the North Island unfortunately your not in for much rain although the Wairarapa and perhaps the Hawkes Bay will do ok.

Rain for the West Coast of the South Island heavy at times is on order and the east coast gets rain then showers spreading northwards during the day with a southwest change. For the North Island itâ€™s cloudy in the west with the odd light shower possible, mostly sunny in the east with some high cloud.

Wednesday sees anticyclonic conditions continue over the South Island bringing mainly settled weather, an east to southeasterly airflow over the North Island brings mostly sunny weather out west. Expect some cloud in the east especially about the likes of Gisborne and Northland where there could even be a light shower at times.

Northwesterlies build over the South Island on Thursday with cloud thickening in the west, a few showers move into Fiordland while itâ€™s dry out east. The North Island is settled for most under a ridge of high pressure, Northland and Auckland get caught up in an easterly flow however bringing some cloud and the chance of a brief shower now and then.

Finally at the end of the week a front moves onto the lower South Island early in the day then moves northwards bringing cloud and a few showers, mainly to the south and east. The North Island is relatively dry and sunny although some cloud about Northland and Auckland could bring a shower or two but only brief if any fall.