Fairly placid week ahead, nothing extreme in the works 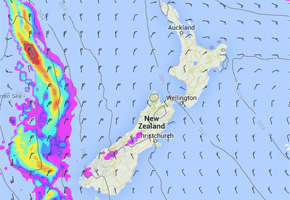 The week ahead is looking fairly average, no extremeâ€™s to note although northwesterlies may get up about some regions / areas for a time. So onwards we go……

Monday has a northeasterly airflow over the country, for the North Island many regions could see morning cloud then expect sunny areas. Perhaps some morning drizzle too mainly about the Bay Of Plenty, then the risk of a shower late afternoon or evening about some western parts of the Island. Wellington sees morning drizzle clear then afternoon sunny areas, winds from the east or southeast. Patchy rain or drizzle about many upper South Island regions gradually clears away during the day, the lower South Island has morning cloud break to sunny areas.

Generally settled over the North Island on Wednesday due to a ridge of high pressure, mainly sunny although expect some high cloud, mid level cloud at times too. Warm in the east of the South Island with sunny areas and some high cloud, a bit cloudier in the west especially further south in South Westland where showers are likely for Fiordland.

A low moves into the Tasman Sea west of the country on Thursday. Mostly cloudy for the North Islandâ€™s western regions, a few showers develop about the southwestern corner of the Island too. Drier out east with high cloud. Patchy showers for the South Islandâ€™s West Coast clear by evening, winds fairly light. Southerlies gradually move up the east coast of the South Island during the day bringing some cloud and then gradually a few patchy showers or some drizzle.

Finally on Friday the North Island is looking to have periods of cloud and a few sunny spells, there could be a shower or two about for some otherwise mainly dry with light westerlies. Winds about the southern half of the Island will be from the south. Over the South Island there will be fairly cloudy skies in the east, perhaps a light shower or two mainly morning and southerly winds. Looking drier and warmer for the West Coast.

Does not look to affect NZ.

Ref 3rd paragraph. Is the front decaying or delaying off to the West?

It is meant to be decaying. It’s a front which is weakening in a sense.