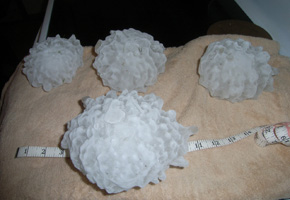 So where do the most tornadoes occur per area per year? America?…….. Wrong.

Where would the biggest hail stones fall? America you say surely? Wrong again.

America would be the first place that comes to mind due to all the things we hear about “storm chasers” on the plains there. But here is some information which will tweak your mind.

The largest and deadliest hail falls on the Deccan Plateu of northern India and in Bangladesh. The heaviest authenticated hailstone ever measured was one of 2.25 pounds that fell in the Gopalganj district of Bangladesh on April 14, 1986. The stones size was not measured although anecdotal reports claimed the stones were the size of “pumpkins”.

Ninety-two people perished as a result of the storm although how many of these can be attributed to the hail is uncertain. A hailstorm in the Moradabad and Beheri districts of India killed 246 people on April 30, 1888, the deadliest hailstorm on record in modern history.

In regards to tornadoes, note above I mentioned the most tornadoes “per area” per year. The UK has the highest number in this regard with 0.14 occurring every year per 1000 km squared. Fortunately most of the UK variety tornadoes are fairly weak. The United States still leads the list in terms of tornadoes affecting a country, with an average of over 1000 tornadoes recorded each year over the whole of the USA.

New Zealand’s land mass just isn’t big enough to help create these huge storms that create large hail and big tornadoes, and most would say thank goodness it isn’t. The closest we have had recently is the September 4th thunderstorm in Christchurch 2 or so months back. That storm was in terms of structure similar to the large storms that affect America however on a smaller scale.

I grew up on the West Coast of the South Island and saw plenty of small tornadoes and especially waterspouts. I’m guessing that one of the reasons we’re so low down the scale is that most are not seen whereas in the UK most of the land mass is populated.

I would tend to think the same Andrew, the population on the coast being smaller would be a factor.

The coast is good for tornadoes as winds runs parallel (from the NE) to the mountains there and when fronts approach from the south it sets things in motion with wind going in all directions.

There are other factors but that is a big one.

Parts of New Zealand would also be very high up the scale for the frequency of tornadoes. We get plenty in Taranaki where I live but they seem to be regular events all up the west coast of New Zealand and in northern areas too. I’ve seen several and had close shaves on other occasions.

True, they’re nowhere near the size they get to in America but they’re still scary and a real worry in the right (or wrong) weather conditions.

Yes New Zealand is a country resonably high up in terms of tornado frequency. The West Coast of the South Island may get more then is reported due to it being sparsley populated.

I hope to see a West Coast tornado one day! Either there or Taranaki which is another good spot for them as you note.