Home > News > Exploring the Accuracy of Weather’s Most...

Exploring the Accuracy of Weather’s Most Enduring Folk Wisdom 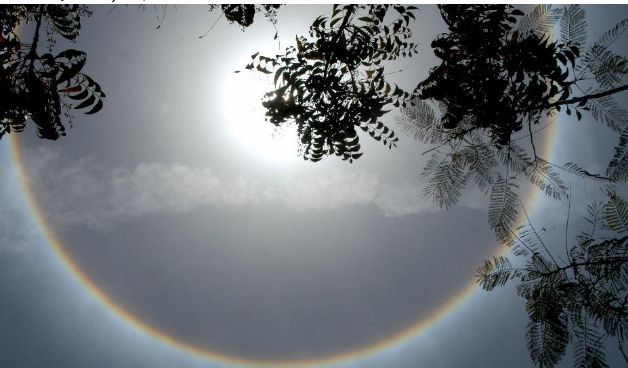 Since long before the advent of satellites, Doppler radar and savvy weather reporters, humans have been used their observational skills to interpret and predict meteorological events. Because much of this folk wisdom survives and continues to guide our thinking, itâ€™s time to examine the accuracy of these maxims.

An early expression of this adage can be found in the Wycliffe Bible (circa 1395):

The modern version of this maritime advice remains popular among weather watchers. So whatâ€™s the science behind it?

That red sky is the product of dust and aerosols associated with a low-pressure system (the impurities do a better job of scattering long â€” meaning red â€” wavelengths). Low pressure indicates stormy weather. In the region where the westerlies determine wind patterns, a red west-setting sun indicates that the foul weather is moving away from the sailorâ€™s position. A red sky in the morning means the seafarer is headed right for the storm.

On the other hand, this advice would need to be reversed to hold true where the easterlies prevail.

The appearance of celestial bodies offers valid clues about impending weather systems. That ring you notice sometimes is your optical interpretation of light passing through ice crystals blown high by storm clouds or from cirrus clouds. This proverb is most accurate during the cold months at mid latitude. Just remember: when you see the ring, some galoshes might be a good idea.

Avian animals demonstrate sensitivity to the fluctuations in air pressure that indicate a coming storm. And it makes sense. After all, birds depend on air density and currents to achieve flight the most efficient flight.

The high air pressure that accompanies clear, sunny weather makes for good high flying from an aerodynamic standpoint. Under low pressure, the best air density for flight is lower to the ground. When the birds go low, consider taking an umbrella with you.

When Cows Lie Down, Rain is On the Way

While birds seem to be a fairly safe forecasting bet, cow behavior is a more controversial method. Folk wisdom says that when members of the herd lie down in the field, a good shower could be on the way. The logic behind the claim: cows stay standing when they want to cool themselves but lie down when they need to get warm. So the cold that precedes a storm could inspire bovines to hunker down. But a cow isnâ€™t a barometer, and just like people, animals behave according to mood. So when Bossy is on the ground, it could mean cold weather, or it could just mean sheâ€™s sleepy.

When Your Joints Hurt, It Means Rain is Coming

You may not be as instinctively responsive to weather changes as a bird or other wild creatures, but your body, too, is capable of indicating a change in the weather. In a study conducted across several cities, people reporting on their chronic pain symptoms discovered that flare-ups often preceded shifting weather. No wonder many chronic pain sufferers prefer locales where dry, warm climate is the norm.

This statement is poetic, but simply untrue. Whether itâ€™s a mere fluke or an element of the site that renders it more vulnerable to strikes, a place isnâ€™t immune to electrification just because lightning has visited before.

While some of the folk wisdom surrounding weather is debatable or proven false, these old sayings are a good reminder that our own senses can sometimes be a forecast worth paying attention to.

Holly Zynda is a copy editor, proofreader and writer with a lifelong passion for the written word. She owns and operates Owl Intermedia, a content production and editing company, and has provided writing and editing services for companies ranging from GoPro and Reputation.com to The California Environmental Protection Agency and Genentech.

– Homepage Image / A solar halo is seen around the sun in the Yemeni port city of Aden. The optical phenomenon is mostly caused by ice crystals in cold cirrus clouds located in the upper troposphere
(KHALED FAZAA/AFP/Getty Images)

– From our partners at Wundeground