Explanation: Why it’s been so windy over NZ 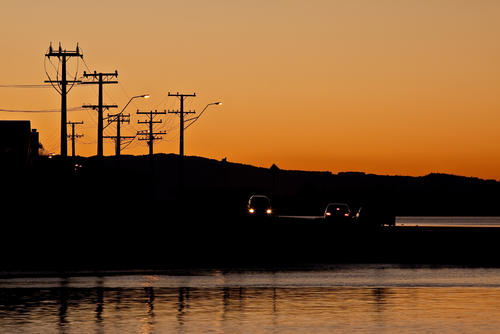 After what has been a windy past two weeks for some areas the winds are today finally light for most as a deep low in the Southern Ocean moves away to the east, while a large high in the Tasman drifts closer to us.

The air pressure gradient was a staggering 60 to 70 hectopascals (hPa) between the two systems.  Air pressure, which is shown as isobars on weather maps, is similar to the lines on topographical maps.  The closer together the steeper the gradient (and the windier it is).  The more spaced out those lines are the lighter the winds are due to a far more gentle gradient.

At one stage the high in the Tasman was close to 1030hPa and the low to the south east was 960hPa.

On a topographical map that would look like a steep mountain range!

It’s this “mountain range” in the air that creates the wind.  The steeper the slope the stronger the wind.

The ‘squash zone’ is the area where the isobars are tightly packed together, where the air pressure falls/rises the most over a certain distance.

As the high moves in and the low rolls away the winds will ease too… but unfortunately for many it does return on Monday, so make the most of a calmer Sunday.

WeatherWatch.co.nz expects windy weather, off and on, to continue well into December and possibly right up until Christmas but the worst of the winds should start to ease in the coming weeks.

Why is it so cold in Dunedin at the moment. It’s sunny but feels very cold.

Cool breezy easterlies keeping the temperature down. You should have more luck with warmer temps today then cooling down a little again for the week ahead.

I learnt about all this in intermediate school and most of it stuck, but I really like your description – it’s a nice comparison!

Out of curiosity, and I know you may well have talked about this before, but what kind of conditions are we expecting for the summer? Will it be hot, dry and windy or wet and humid?

Today was a contrast to several earlier ones here – fine with a bit of haze and odd patches of very thin cloud, light southerly breezes. Very pleasant.