Exclusive: US Tornado expert talks to WW about Hobsonville tornado 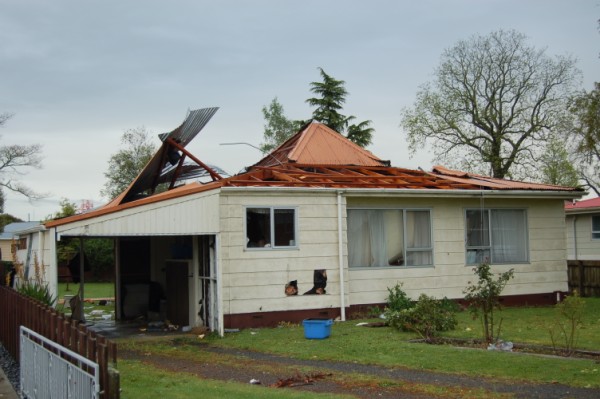 Following last week’s deadly tornado in Auckland WeatherWatch.co.nz sought professional advice from a leading US tornado expert, about what took place and if it was something that could have been predicted.

Dr Greg Forbes is The Weather Channel’s (weather.com) Severe Weather Expert – a student of the late Ted Fujita, a Professor at Penn State and a recognised world expert on tornado dynamics, convective meso-meteorology, and tornado taxonomy.

He spoke exclusively to WeatherWatch.co.nz on Thursday.

“We can’t predict precisely the location of where a tornado will strike, even using Doppler radar – as there are some misses and many false alarms” says Dr Forbes, backing up what WeatherWatch.co.nz and MetService have said over the past week. “That said, we issue tornado (or severe thunderstorm) watches when conditions are favorable for a heightened risk of tornado/severe thunderstorm formation”.

In New Zealand MetService has a severe thunderstorm warning system – a fairly new system that, before it was launched, Bob McDavitt from MetService worked with WeatherWatch and The Radio Network to better get these messages to the public.

However Dr Forbes says not every tornado can be predicted but the risks can be. WeatherWatch.co.nz predicted a low risk of a tornado last Thursday morning and the evening before had a low risk of funnel clouds. However we did only say there was only a low risk of a tornado – and this is a vital part of the equation says Philip Duncan of WeatherWatch.co.nz. “I think the past several years have proven that New Zealand does get tornados, they can be frequent, they can be damaging and two have been deadly, others have caused injuries. It’s time we started to do a better job at not only advising the public of tornado risks – but also to better educate the ‘hit and miss’ nature of them”.

“it’s about telling people ‘this zone here has the right ingredients for a tornado today’.  The zone may be as small as half of Auckland or as large as the west coast of New Zealand.  It also doesn’t guarantee a tornado will form – but if the warning or advisory makes more people aware of the incoming weather and any severe weather then we’ve done our job”.  Tornados are often accompanied by other severe weather such as lightning, hail and flash flooding.

“We need to get to the point that we, as forecasters, can issue a low threat of tornado without it becoming a major news headline, but is perhaps enough to make people more aware of incoming severe weather and more aware of what is happening in the skies above them”.

Mr Duncan says the weather industry in New Zealand is a couple of decades behind the US and says that both MetService and WeatherWatch.co.nz should be working together with US experts to better understand tornado formations in New Zealand.

Dr Forbes goes on to say “the public has to understand this “hit or miss” nature of severe thunderstorm and tornado phenomena.” something that both MetService and WeatherWatch.co.nz have expressed in recent days.

“It was a little unusual that [MetService] said that tornadoes [in New Zealand] happen in the cold season, but didn’t mention or comment on this one being in the midst (or at least early portion) of the Southern Hemisphere warm season” said Dr Forbes.

WeatherWatch.co.nz appreciates the difficulty of tornado predictions and aren’t on a witch hunt to demonise others – however the general public pays millions of dollars of taxes into MetService to fund warnings, which is why we analyse any potential failures and want to proactively and positively work with them to help protect more New Zealanders in the future.

Just In – you may also be interested in Howard Joseph’s blog out today about the tornado – from his 30 years experience working in tornado alley in the US MidWest.  Opinion: Tornados – We can do better