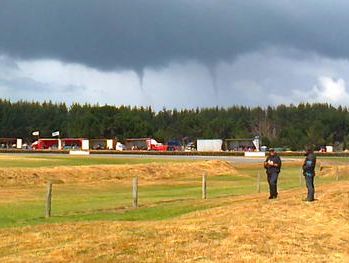 Yet another series of funnel clouds have been caught on camera.  These two funnel clouds formed over Southland yesterday according to WeatherWatch.co.nz reader Lawrence Saysell.

Mr Saysell says the photo was taken at Teretonga raceway near Invercargill at 11:45am looking south toward Bluff.

He says the funnel clouds lasted about 10 minutes before fading.

Funnel clouds have also been spotted over Waikato and Manawatu this summer.

A funnel cloud is the beginning of a tornado or waterspout – but can’t officially become either of those until it touches land or water.