Evacuations in Fiji after Cyclone 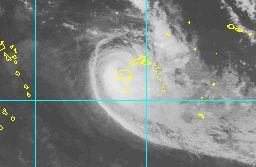 Officials in Fiji are assessing how much damage Cyclone Mick has caused overnight.

The category two cyclone went through the main island, packing winds of up to 156 kilometres an hour and causing flooding in Suva, surrounding areas and outlying islands in the region. Evacuations took place in Navua and Lautoka southeast of Suva and people were forced to take refuge in temporary shelters.

Unicef spokesman Tim Sutton says the storm has impacted on many people, especially those who are hard up economically and are living in informal settings along the tidal rivers, struggling to survive.

Fijilive.com reports that there has been damage to homes, schools and plantations in the western division. It says most areas of Navua remain flooded and rising water levels at the Rewa River has forced many out of their homes at the Rewa delta.

The website reports that in the Ba Province, 21 buildings have been destroyed. Schools that have suffered damage include Yasawa High School and Naloto District Schoool.

Evacuation centres have been opened for the displaced. Further flooding is expected in the central division at high tide later today.

Cyclone Mick is now moving southeast of Fiji at 20 kilometres an hour. A gale force warning is in force for Lomaiviti, Moala and the Lau group.