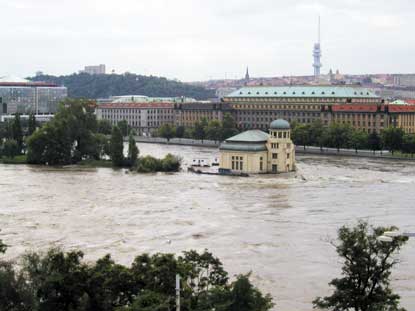 All the weather action doesn’t belong to the US this weekend as serious flooding continues to grip parts of Europe.

A state of emergency has been declared in the Czech capital, Prague, after days of heavy rains swelled rivers and forced evacuations from some low-laying areas.

Soldiers have erected metal barriers and piled up sandbags to protect the city’s historic centre from flooding.

Prague authorities also limited public transport and closed underground stations as water from the Vltava River overflowed into parts of the Old Town.

The historic area is a UNESCO heritage site boasting hundreds of well-preserved buildings, churches and monuments dating back mostly to the 14th Century, including the Charles Bridge that straddles the Vltava.

“Due to the current situation, I have declared a state of danger for the area of the capital city,” acting mayor Tomas Hudecek told a news conference.

The situation brought back memories of floods in 2002 that killed 17 people, forced tens of thousands from their homes, caused several billion dollars of damage across Prague.

Authorities in parts of central Europe have issued disaster warnings and scrambled to reinforce flood defences as rivers threatened to burst their banks.

Several people have died or are missing in the floods in Germany, the Czech Republic and Switzerland, which began last week.

Rising rivers have forced evacuations, highway closures and the shutting of rail lines.

I reckon it would be cool if your articles came with pictures – there is always a small pic on the homepage and then we open the article and there are no pictures. I know I could find some on a news site – I just think it would add to your information.

Thanks for your feedback.

We did this back in the day however it took up valuable space at the time.

We’ll look into it again though.