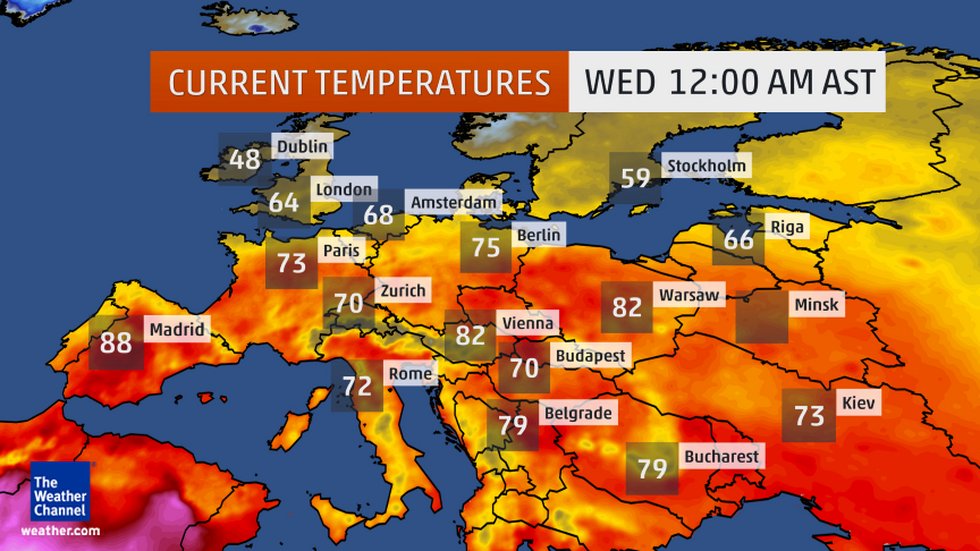 An extended heat wave is smashing all-time records in parts of Europe for the second time this summer, and may remain in place into next week.

Prime Minister Ewa Kopacz asked residents to conserve energy between 10 a.m. and 5 p.m., but said there would be no power cuts to individual customers or hospitals.

Wroclaw, Poland, set an all-time high temperature Saturday of 38.9 degrees Celsius (102 degrees Fahrenheit) according to weather records researcher Maximiliano Herrera, who maintains a comprehensive set of extreme temperature records on his site. The average high in early-mid August in Wroclaw is only about 23C (74F).

Henson also said Friday was the hottest day of record anywhere in the Berlin, Germany, metro area, as Kaniswall station, on the city’s southeast side topped out at 38.9C (102F).

At least 19 cities in the Czech Republic tied or set new all-time heat records, according to Herrera.

In an internal email, Herrera said Minsk, Belarus, bested its previous all-time record high set just one year ago, reaching 35.8C (96.4F) Saturday. Other all-time records were set during this heat wave in Genoa, Italy (38.5C/101.3F), and Kaunas, Lithuania (35.3C/95.5F), according to Herrera.

Red alerts for extreme heat continued into Wednesday for much of Poland, all of Slovakia, Hungary and eastern Austria, according to Meteoalarm.

Unfortunately, for the most sweltering areas of central and eastern Europe, there’s little relief in store.

A blocking configuration at the jet-stream level known as an “omega block” will keep the warmth entrenched across eastern Europe, from Poland, Hungary and Serbia east to the Ukraine, Belarus and the Baltics late this week into at least early next week.

Any heat this week from France to Germany to northern Italy should gradually ease by the weekend as an Atlantic cold front brings relief to western Europe.

Just over a month ago, a late June and early July heat wave smashed monthly and some all-time records in the U.K., France, Spain, the Netherlands and Germany.

“This July 2015 was the warmest July on record for Spain, Italy, Switzerland and Austria,” said Weather Underground Director of Meteorology, Dr. Jeff Masters.

“Europeans have been painfully aware of the dangers of extreme heat since the killer heat wave of July 2003,” said weather.com senior meteorologist Nick Wiltgen. According to the United Nations, an estimated 30,000 Europeans (14,000 in France alone) died in that heat wave, making it the deadliest natural disaster of the past 50 years in Europe.