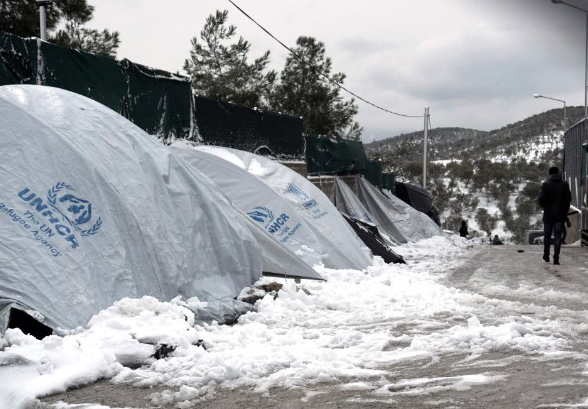 Freezing temperatures and heavy snowfall are making life even harder for thousands of refugees living in limbo across Europe.

The cold snap gripping Europe has left dozens of people dead, including refugees in Bulgaria, according to Agence France-Presse.
Snow blanketed the Moria refugee camp on the Greek island of Lesbos, home to more than 4,000 people, on Friday. A spokesman for the UN Refugee Agency (UNHCR) told CNN Monday that the organization was transferring some 120 vulnerable men, women and children, including people still living in tents, to hotels following the storm.
The situation in Moria is fluid, and the spokesman did not have an estimate for the number of people still living in tents. Volunteers say thousands of refugees are still living in outdoor tents in the camp, despite statements by Greece’s minister for migration, Yiannis Mouzalas, indicating otherwise.
“There are no refugees or migrants living in the cold anymore,” Mouzalas told journalists at a news conference Thursday. According to local reports, Mouzalas suggested that there were only a handful of tents left in Vayiohori, near Thessaloniki, and Athens.

A Lesbos resident and volunteer, Philippa Kempson, shared video with CNN showing the shocking conditions at Moria camp, where some tents appeared to have collapsed underneath the weight of the snow.
“I’m amazed no one is dead yet,” she said. Kempson and her husband Eric have been helping with relief efforts on the island since the refugee crisis escalated two summers ago. They said that this is the worst winter they have experience on Lesbos for 15 years.

Ella Carlquist, founder and chair of the humanitarian organization United Rescue Aid, also known as United Rescues, told CNN that she has seen a few cases of hypothermia at Moria camp, where many people don’t have proper winter clothes.
“The weather has been bad for quite a long time now. People think that Greece is eternal summer and beaches. It’s not like that,” Carlquist said.
Lia Gogou, a researcher working with Amnesty International who was in Moria in early December, said that even people sleeping in containers aren’t able to keep warm. Amnesty International is campaigning for asylum seekers to be transferred from the Greek islands to the mainland.
“Asylum-seekers on the Greek islands face overcrowding, freezing temperatures, lack of hot water, violence and hate-motivated attacks,” Iverna McGowan, director of Amnesty International’s European Institution’s Office, said in a statement. “While we have long called for reception conditions to improve, forcing refugees to stay on the islands only so that they can be returned to Turkey, in line with Turkey’s interpretation of the deal, is inhumane.”

UNHCR spokesman Adrian Edwards made a similar plea at a briefing Friday, one day before the arctic blast slammed Europe.
“The UN Refugee Agency is today reiterating its call to accelerate the moving of asylum seekers from the Aegean islands to the Greek mainland,” Edwards said at the Palais des Nations in Geneva. “The need for better protection will become all the more acute this weekend when temperatures on the islands are expected to drop. We are worried.”
According to UNHCR, as of January 4, only about 7,800 people have been relocated or scheduled to relocate under the EU Relocation Mechanism — around 12% of the 66,400 places agreed last year.
Transfers of asylum seekers to the mainland are only allowed after people have completed the registration process, which has been delayed by a number of factors, including a shortage of spaces on the mainland.
“It’s completely inhumane. People are getting stuck here for a year. How do you expect people to survive?” Carlquist said. “What we have here is not even a refugee situation anymore… it is thousands of homeless people with no future.”

UNHCR hailed a â‚¬25 million contribution from the EU aid department, known as Echo, in a video shared to Facebook in late November. In it, UNHCR highlighted how the funds were being used to help refugees prepare for winter.
Aspasia Kakari, a communications manager at MÃ©decins Sans FrontiÃ¨res (MSF or Doctors Without Borders), told CNN that, given these funds, the dire conditions at camps like Moria were completely avoidable.
“If it gets any worse, we will start to see completely preventable deaths,” Kakari said.