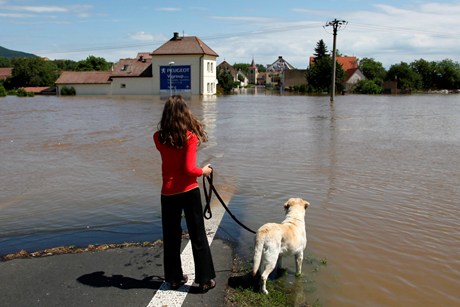 As the Danube River reaches record high levels and thousands flee Europe’s worst flooding in more than a decade, scientists already are predicting that this deluge may be a portent of things to come.

In Passau, in southern Germany at the confluence of the Danube, Inn and Ilz rivers, floodwaters reached 42.3 feet over the last few days. The previous record was in 1501, when levels reached 40 feet.

Extreme weather of the kind ravaging the Danube and Elbe rivers in Central Europe is expected to become more frequent. And while experts note that individual events can’t be attributed to climate change, they say Europe needs to start preparing for even worse floods.

“The E.U. needs a comprehensive strategy including flood prevention and warning systems,” said Gregor Vulturius, a research associate at the Stockholm Environment Institute. “They need to increase public awareness and carry out risk mapping to ascertain where they should allocate resources.”

Vulturius pointed out that flooding is influenced by social and economic conditions as well as climate. Cities need to add a layer of preparedness, such as land-use restrictions in flood-prone areas, provisions for groundwater pumping and regular dredging in some areas to minimize silt and sand deposits on riverbeds following heavy rainfall.

Cities, he said, must ready public infrastructure not just for 100-year events — which are now occurring every few years — but also for 500-year events. At the same time, he noted, some parts of Europe, like Dresden and Saxony in Germany, have done significant work since the last major flooding in 2002, such as placement of channels on the Elbe River to cope with runoff from an extreme flood event. The E.U. price tag for mopping up after those floods was $16.5 billion.

According to Munich Re AG, the world’s largest reinsurer, the cost to insurance underwriters of the 2002 flood was $3.4 billion. To date, Munich Re has been unable to estimate what the exact cost of the 2013 floods is likely to be.

“It is still too early to evaluate the current flood catastrophe and its related losses, especially because the floodwaters have yet to drain away,” said Anette Lamberts, Munich Re’s head of media relations. She added that it would likely be several weeks before the company could issue a reliable figure because, despite the fact that the rain has mostly stopped, the floodwaters have not yet reached their zenith in some areas.

In northern Germany, the water is expected to rise even further before the worst is over. The Danube’s waters are predicted to peak today in Hungary’s capital, Budapest, and are expected to reach 29.5 feet, some 10 inches higher than the river’s previous record in 2006.

Prime Minister Viktor Orban has declared a state of emergency. Thousands of volunteers worked overnight to reinforce the riverbanks, and an emergency evacuation facility capable of temporarily housing 15,000 people has been set on Budapest’s fairground.

Cities will not be the only casualties. Germany’s agricultural ministry estimated damages from the flooding to be in the range of $232.6 million.

River towns in Switzerland were flooded last week following unusually heavy rains, and mountain highways, such as this one near Kornberg, had problems with mudslides. Photo courtesy of Flickr.

The DBV, the German Farmers Association, estimates the total cost will be much higher in the neighborhood of $396.5 million. The association expects total area of farmland under water — currently 370,658 acres — to rise to 617,763 acres. It won’t know the scope of the damage until the waters recede. These figures do not take into account the replacement cost of equipment, buildings and livestock. DBV President Joachim Rukwied announced the creation of a relief fund in conjunction with a charitable foundation to make up the shortfall.

Although scientists hesitate to draw a direct relationship between weather and climate, observation of weather patterns shows a definite correlation between extreme weather events and a warming climate.

“If we look at precipitation events over the long term, there is an increase in frequency of extremes. Events such as the one we’re seeing now are occurring about twice as often as they did a century ago,” said climate scientist Mojib Latif from the Helmholtz Center for Ocean Research in the German Baltic city of Kiel.

Extreme events, points out Latif, are not limited to floods. Nor are they limited by geography.

“Weather is unpredictable,” said Latif. “But what we are seeing from the scientific data is instability, and not just in Europe.” Africa, for example, has experienced severe flooding in the past few years with tens of thousands displaced. And extreme events are not limited to flooding.

“Drought conditions are increasing as well as flood conditions,” said Latif. “We’re going to be seeing many more extremes in both directions in the future. They are two sides of the same coin.”

The cause of the present flood has to do with the mass of water vapor in the air, which is partly the result of higher air temperature. “The water content in the air depends on the temperature, as temperature regulates how much water can evaporate,” said Latif.

The European flooding of the past few weeks was caused by a low-pressure system over eastern Europe drawing warm, moist air from the Mediterranean region. The warm water vapor concentrated north of low-lying mountain ranges and the Alps, and then condensed when it arrived in the cooler regions of central and eastern Europe. The result was torrential rainfall.