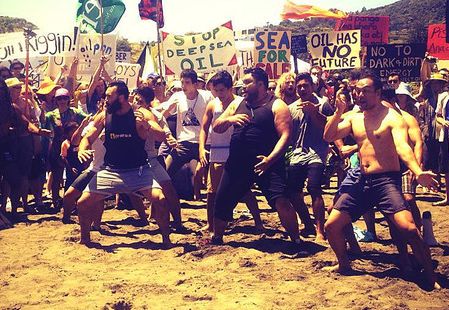 More than 1000 people turned up at one of Auckland’s famous west coast beaches to protest against deep sea oil drilling in New Zealand waters today.

Protesters turned up in their droves, waving and carrying banners, to show their support for the Oil Free Seas flotilla, which is protesting where oil giant Anadarko intends to begin drilling off the coast of Raglan.

Popular beach, Piha, hosted the main event, with speeches and a haka, which saw over 1000 people attend. Around 400 people joined the protest at Muriwai, 500 at Bethells Beach, and almost 750 at Raglan.

Figures for the more than 34 other beaches taking part up and down the country were not yet available.

Protesters – who were asked to bring their own homemade banners – carried signs reading: “we love our beaches”, “deep sea drilling is not worth the risk”, and “Anadarko go home”.

One of the more inventive ones likened Anadarko to anaconda snake oil.

“There’s been an incredible turnout,” he said. “The creativity of some of the banners – humorous, pointed, and totally inspiring.”

“We have this incredible potential for clean energy [in New Zealand], we are actually a power house on clean energy, so it’s just a no-brainer for people,” he said.

Many felt the full economic potential and the possibility for New Zealand to become a world leader in green energy would be lost if the government focussed on deep sea oil drilling, he said.

If Prime Minister John Key’s cabinet didn’t see that, they have “really got their heads in the sand”, he said.

Protesters joined hands to form a human chain from the land to the sea, and a haka was also performed.

– Image / A haka is performed today at Piha / Greenpeace NZ