Home > News > Enjoy the good weather today while it la...

Enjoy the good weather today while it lasts 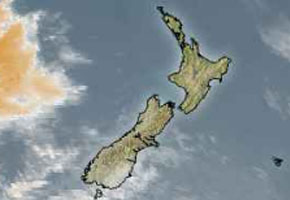 Today we have mostly sunny weather across the country although there is some cloud across lower areas of the South Island. The North Island is largely cloudy free but there is a reasonable southwesterly breeze blowing. WeatherWatch.co.nz forecasters say to enjoy this sunshine while it lasts as conditions will deteriorate later on Friday for most as our low now developing on the east coast of Australia nears.

Temperatures so far today along the east coasts of both islands north of Canterbury, also the Bay Of Plenty and Northland have been fairly pleasant up into the high teens or early 20’s. Good old Gore a bit on the cold side sitting on 9 degrees.

Rainfall hasn’t been too high about the country over the past 24 hours although that’s not to say there has been no rain, the West Coast of the South Island and about the Catlins has received upwards of 5mm in places. Northeastern parts of Northland received the most due to a rain band, 10 to 15mm fell there yesterday.