Home > News > Emotional story of survival from US torn...

Emotional story of survival from US tornado outbreak 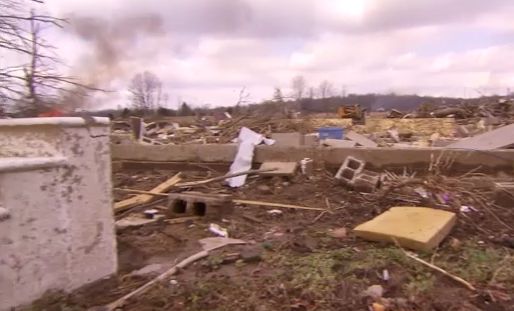 CNN — The parents and their three children — all age 2 or under, including one buckled in a car seat — held hands on the hallway floor of their neighbor’s mobile home, praying a fast-approaching storm would show them mercy.

Mother Nature answered with a fierce tornado, which violently swept them up, separated them and deposited them about 100 yards away.

Four of their limp bodies were found soon thereafter. But for two days, hope lived on in the form of 14-month-old Angel Babcock.

That glimmer died at 4:10 p.m. Sunday, shortly after Angel’s extended family made the decision to take her off life support at Kosair Children’s Hospital in Louisville, Kentucky.

“When they pulled the plug, her little arms reached up into the air, like she was reaching for someone,” grandfather Jack Brough said. “They stayed that way and I said, ‘My God. He’s taking her.'”

“They (were) good people,” said Andy Lanham, one of those who came across all five after the storm walloped southern Indiana on Friday afternoon. “Nobody deserves it. I hate it.”

Before the storm struck, residents knew that New Pekin could be facing some severe weather. But it came sooner than many expected.

The Babcocks lived in one of a cluster of homes adjacent to a field and near a sawmill that the Lanham family — which owns the mill — had let them live in as they tried to get on their feet.

One of their neighbors, Jason Miller, saw the storm coming and invited the family of five to his larger, double-wide mobile home, believing it would be safer for everyone, according to two of his brothers and a good friend.

“Knowing my brother, he would have done anything he could do to help anyone in that situation,” Joshua Miller said.

The family accepted the offer, huddling together on the floor of their neighbors’ home and praying. At one point, Jason Miller peeked outside and saw the tornado right outside the front door.

What happened next was an awesome, frightening, devastating blur.

After the twister finally passed, Andy Lanham — who lives nearby — joined residents assessing the wreckage and searching for people who needed help.

They found the bodies of Moriah Brough, 20, and Joseph Babcock, 21, in gravel behind the sawmill.

Their three children — 2-year-old Jaydon Babcock, 2-month-old Kendall Babcock and Angel — had been flung into the muddy field.

Only Angel was alive.

First responders arrived and “tried to work on her,” recalled Lanham. She was eventually flown to Kosair Children’s Hospital.

She spent the next two days in critical condition, suffering from what the hospital’s chief nursing officer, Cis Gruebbel, described as “severe head and neck injuries.”

Jason Miller, meanwhile, was spotted walking around, bloodied, muddied and with his arm dangling. His brothers said he’d estimated the tornado thrust him 40 to 50 feet in the air before depositing him face-first in the mud.

“He was out of his mind,” Lanham said of Miller, who was dazed, but pumped on adrenaline after the ordeal.

It wasn’t until Saturday that Miller’s relatives told him what had happened to the Babcocks, whom he tried to save. His brothers say they worry about how he’ll handle the psychological trauma of knowing that he was the only one in that mobile home that survived.

“He just feels bad that he couldn’t help them, that he tried and he couldn’t,” said Paul Miller.

Today, Miller has five broken ribs, a partially collapsed left lung, an elbow in three pieces, a shoulder blade broken in two places and a fractured back, his brother Paul said. And yet, his brothers freely acknowledge, he is the lucky one.

And they know their family’s situation — steering a loved one through what’s bound to be an arduous physical recovery — is infinitely better than that of the Babcocks and Broughs.

The 20 or so extended family members who surrounded Angel Babcock this weekend decided that revival wasn’t possible for her, according to Jefferson County, Kentucky, Deputy Coroner Bob Jones.

“Angel has been reunited with her parents,” said Jack Brough, her grandfather, in a statement released through the hospital.

“God will bring you and all of us out of this,” he said, speaking to those who offered thoughts and prayers. “That is what it will take.”

gosh that’s so sad. Can’t imagine what the people of these towns are going through 🙁

Weather can be so unfair and tragic.