Eastern US clobbered by mammoth snowfall 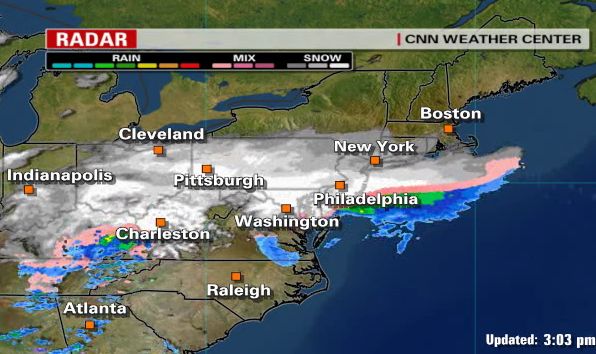 More snow pounded the nation’s capital and mid-Atlantic states Saturday, cutting power to hundreds of thousands of customers from Virginia to Pennsylvania.

“We are getting absolutely clobbered this morning with snow,” said Steven Steingard, a lawyer who lives in suburban Philadelphia, Pennsylvania. “We have about a foot [30cms] already, and they say it will continue for 10 to 12 hours more.”

Philadelphia reported 40cms at the airport at 7 a.m., the National Weather Service said.

Washington received over 50cms of snow at American University over two days, and was on track to possibly break a record. The capital received 71 inches [a staggering 1.8metres] of snow in the “Knickerbocker Storm” of January 27-28, 1922.

The storm also may produce a record snowfall for Baltimore, Maryland, which had received 55cms of snow by 11 a.m., according to the National Weather Service.

Annapolis, Maryland, had 18 inches of snow. State officials said 2,400 pieces of equipment were trying to clear highways. The state also was relying on 300 National Guard members to help with ongoing weather trouble.

Flights were canceled at the Washington-Baltimore area’s three main airports and at Philadelphia International Airport.

On Friday, a weather-related accident in Virginia’s Wythe County left two dead, state police said. A father and son stopped on a shoulder to help injured occupants of a disabled vehicle. Minutes later, a tractor-trailer jackknifed and struck their van while trying to avoid hitting the disabled car.

The father and son died at the scene, state police said.

Virginia state police said the accident was one of many crashes and disabled cars reported.

Winter storm warnings were in effect from southern Indiana eastward to New York City and south to North Carolina, with blizzard warnings for Washington, Delaware and the New Jersey coast.

Delaware Gov. Jack Markell declared a state of emergency Friday night and ordered all vehicles off the roads by 10 p.m.

Forecasters were predicting that the mountains of West Virginia and Maryland, west of the nation’s capital, would receive the most snow — possibly 3 feet – almost 1 metre.