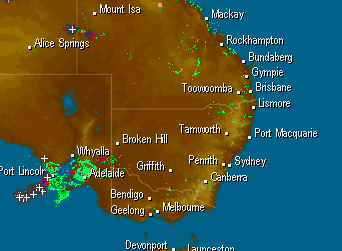 Much of New South Wales and Queensland will have a break from thunderstorms today, but it won’t last long.

A broad area of low pressure triggered severe thunderstorms across both states in the last two days. Coolangatta picked up 38mm in the last 24 hours, its heaviest rain since June. This came a day after golf ball sized hail pelted Ipswich. In New South Wales, more than 50mm was recorded on the ranges west of Port Macquarie during yesterday’s storms, the heaviest in about three months.

The atmosphere has briefly become more stable across much of New South Wales and southern Queensland today as an upper trough moves into the Coral Sea. While conditions will be calmer than the last two days, some storms could still pop up on the coast and ranges from central New South Wales up to southeast Queensland.

A trough will also produce storms over central and western Queensland and far northwest New South Wales today, some of which could become severe.

Thunderstorms will spread across both states again on Friday and Saturday as a new trough and low pressure system move over eastern Australia. Severe storms are likely once again in both states.