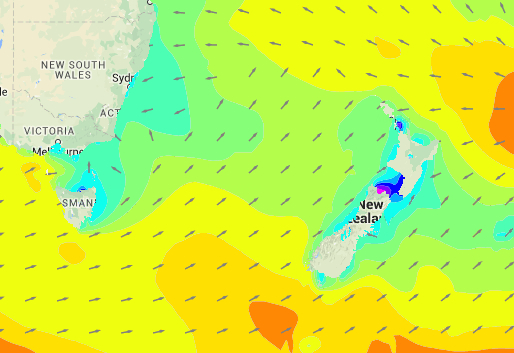 A south to southwesterly airflow will cover the country tomorrow, meaning different outlooks for the east and west of both islands.

The west of the South Island will stay mostly sunny with light winds, and although Greymouth or perhaps even Hokitika northwards will see some cloud, somewhere between Greymouth and Westport northwards there looks to be a few showers possible during the day.
Nelson has periods of cloud and light winds in the morning, which will then tend northerly in the afternoon.

Mostly cloudy about Southland and along the east coast, along with winds from the south or southeast.
There may be some drizzle at times along the east coast, but hopefully long dry periods too, this is of course important for the Cricket World Cup games in Christchurch, but it’s not looking likely to spoil any games during the day.

For the North Island, itâ€™s shaping up to be mostly cloudy along the East Coast, with breezy southwesterly winds, and the chance of a shower or two – more so in the morning.
Gisborne has a greater risk of showers hanging around into the afternoon, then moving further south.
Sunny areas will still dominate though, and some cloud out west with southeasterlies.

The Waikato and Auckland regions see cloud build a little in the afternoon, and there could be an isolated shower or two late into the afternoon and then evening – this is just a low risk, but worthy of note.

Northland will enjoy sunny areas with some cloud, and then cloud builds in the afternoon also, with the chance of an isolated shower late afternoon and into the evening.
The prevailing winds in Northland will be light, with afternoon sea breezes following some lighter stuff in the morning.