Home > News > EARTHQUAKE BLOG: Just when it was starti...

EARTHQUAKE BLOG: Just when it was starting to settle… 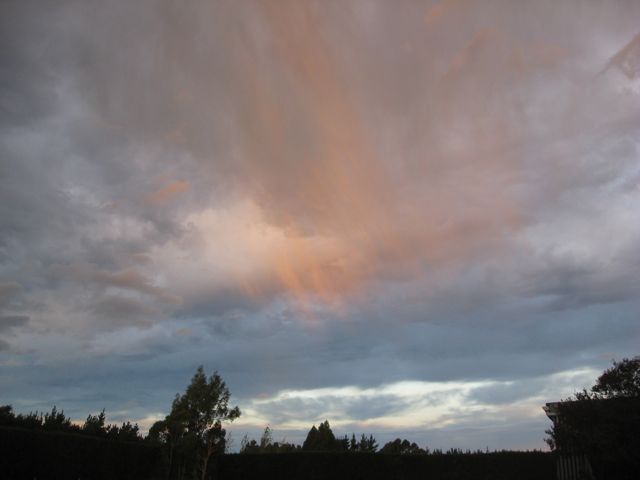 Weatherwatch Analyst Richard Green is from Christchurch and shares his personal experience of the strong aftershock that shook the city and the region last night.

I was on the phone to my Mum yesterday morning and she was saying how the aftershocks here in Christchurch had been basically non existent during the week and rightly so.
There’d been the odd magnitude 3 but very few had been felt however I quickly cut in and warned her about the dangers of even suggesting such a thing, as for many Cantabrians over the last 8 months it felt risky to even suggest that the situation may be calming down.

5.49pm last evening again reminded us it certainly wasn’t or isn’t over.

It had been a funny day overhead with cloud and drizzle from time to time which isn’t unusual perhaps but by 4.30 the cloud showed signs it was breaking and watery sunshine appeared briefly. It was very still, extremely calm.

By 5.15 we were saying cheerio to a few family members who had just flown in from overseas and as we waved goodbye, my wife and I said how remarkably still it was and we both felt as if something could be lurking, which was the first time we’d mentioned anything like that at all.
Is there such a thing as earthquake weather? I’ve never really believed it but if the example yesterday is anything to go by, I’m open to it.
We do get still days during the autumn months and sometimes it can be very pleasant especially without having the annoying cold easterly which pounds us in the summer months.The quiet late yesterday afternoon seemed rather surreal.

At about 5.40 we decided to visit a neighbour on the fringes of Christchurch and noticed in a nearby paddock that a flock of sheep were running  quite quickly. Nothing odd about that as that’s what sheep do but they just kept running around in circles which did seem fairly peculiar. Again my wife and I thought something might be brewing on the aftershock front but this time kept our comments to ourselves until later.

At 5.49pm, there it was. This tremor was quite long and seemed to hit in 3 waves. We lurched for the first one and double checked each other to see if it was what we thought it was and within 2 seconds, the next shudder hit and we decided to make our way under the doorframe and the third thrust made us mover much quicker to take cover!.
Then as quickly as it arrived it had gone and we stood up from our crouched positions and breathed a sigh of relief.

It was a reminder of that hellish day in February and also a trigger for the monster one we had in September as we lived within a couple of kilometres of the epicentre of that 7.1.

To be honest it’s bloody tough having to go through 2 major quakes and the thousands of aftershocks that have followed however it’s almost becoming the new normal of living in Canterbury.
Listening to the quakes roll in and then feeling the tremors and preparing ourselves for what might be. Most of the time we go with the flow but last night’s 5.3 is one we don’t want to experience much more.

We’ll  hang in there and ride it out but there’s only so much we can all take with what Mother Nature has been offering of late.

Richard, well written!
I’d like to say stay strong, however what right has anyone else not living there got to say such a thing.
Mother nature sure is causing much distress and mess.
Someone I know down there, says the vibrations are not the sort she enjoys.
Take care.
Zelda

Your wondering if there is such a thing as earthquake weather triggered a memory. I was born and raised in Hastings. My parents went through the 1931 earthquake, and I have memories of them both making mention of earthquake weather several times while I was still at home. I seem to remember that when the comment was made, the weather was calm, cloudy, and warm and humid, sort of close and oppressive. I can’t recall if their feelings were ever confirmed.

I was chatting to friends online at home when it hit. Was enough to make me stand up and grab hold of my desk. It went on for a long time and a few things that i hadnt duct tape down fell over. There were several waves and ut kept shaking lightly for some minutes afterwards. Anything around a 5 in the southern suburbs (nearest the port hills) is felt fairly sharply.