Earthquake aftershocks ‘could last for weeks’ 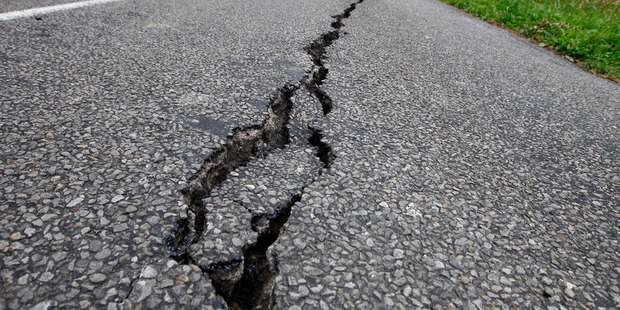 The quake, felt from Auckland to Invercargill and at a depth of 33km, was a product of the inter-plate “high stress zone” that spans the North Island’s east coast from Wellington to the East Cape.

Geonet forecast about 23 aftershocks of magnitude 4.0 to 4.9. over the next two weeks. It also predicts about two aftershocks between 5.0 and 5.9.

GNS Science seismologist Dr Caroline Little said aftershocks, of which 30 were reported near the epicentre within two hours, were expected to carry on for weeks.

But the sequence was not likely to last as long as that which followed the rare doublet of severe quakes near the Cook Strait last year.

Because of the geological nature of the area where the quake struck, scientists were not surprised by it.

Beneath New Zealand, the Pacific Plate is moving west-southwest at a rate of about 50mm each year – about the speed a fingernail grows – and constantly grinding against the Australian plate, causing stresses to build up in the brittle upper layers of the plates.

Geonet scientists identify about 20,000 quakes caused by this each year, of which 250 are felt.

Stories from the quake

In Rangitumau, north of Masterton, Karen Monks and John Hart were reeling at the strength of the quake that cracked all the walls in their home, emptied their cupboards and fridge on to the floor and sent them scrambling to their sleeping 17-month-old daughter, Holly.

“There was a huge bang and we were violently thrown about. It was all I could do to throw myself across the room and out the door and into the other room where my daughter was sleeping in her cot.

“Luckily she has French doors so I threw them open and ran out on to the lawn and just collapsed.”

The family spent much of yesterday riding out aftershocks from their lawn.

“There’s a lot of damage … My husband’s office is an absolute disaster, you can’t even see the floor.”

She said animals on the couple’s farm crowded together in their paddocks.

“It was a sudden, wild, violent shake,” said Dean Hatchard, 48, who lives at the coastal settlement of Castlepoint, where the quake was most fierce. “It was extreme. It’s by far the most violent earthquake I’ve ever felt.”

Mr Hatchard was in his bedroom when it hit – “It was either an earthquake or a truck had hit the house.”

The quake rolled on with no sense of how long it took to pass, he said. When it calmed, he was relieved to find there was no damage. In town others had not escaped as lightly, although most appeared to be the loosening of internal fixtures or ornaments.

Large chunks of Castlepoint’s famous rock outcrop tumbled into the sea when the quake struck, said Mr Hatchard. “Quite a bit of rock has fallen off Castle Rock itself. The southern face slipped away to the sea, creating quite a cloud of dust.”

Shona Zander was heading into a supermarket in Palmerston North when the quake hit. She clung to a pole to keep herself upright – “I couldn’t walk” – and watched people diving for safety from their cars as the quake sent vehicles across the carpark shaking.

“They were jumping out of their cars screaming.”

As she hung on, Mrs Zander said she could see the large supermarket windows “whipping” in their frames. When the shaking stopped, she looked inside the supermarket to see shelves of goods emptied to the floor and smashed wine bottles littering aisles.

Also inside, panels had fallen from the ceiling, along with air conditioning units. “It’s the worst earthquake I’ve been in.”

Kate Jurlina was welcoming her mother for a family birthday celebration at her home 10 minutes northeast of Masterton when the quake struck. “We’re pretty shaken. We’ve had heaps of damage in our house.”

The quake knocked 2-year-old Molly off her feet, while Ms Jurlina’s three older children were tossed about trying to find a doorway. “We grabbed the kids. They were screaming and running everywhere. The whole house was going for it – just going for it.”

Cracks in plaster around walls and ceiling were webbed throughout the house. Mirrors and pictures were thrown from the walls while the contents of the fridge and pantry were thrown to the floor. Family from Northland were also visiting and were caught up in the quake, although Ms Jurlina’s first fears were for family in Wellington.