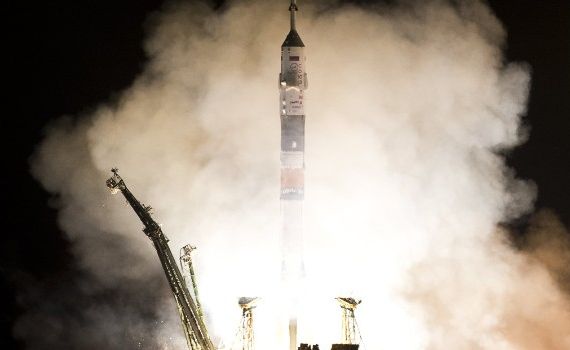 We look to the skies for our weather – but many people with an interest in the weather also have an interest in what happens beyond earth’s atmosphere.  This story (below) has just come in from CNN reporting that, for the first time ever, humans have travelled from earth to the International Space Station in just six hours….eight hours faster than flying from Auckland to Vancouver.

A spaceship? In that much time, you could get from Earth to the International Space Station.

That’s what happened with a Soyuz TMA-08M spacecraft, which launched from Kazakhstan at 4:43 p.m. ET (US)  Thursday, or 2:43 a.m. Friday local time, with three soon-to-be space station crew members on board. NASA mission control declared “contact and capture confirmed” at 10:28 p.m. ET — four minutes earlier than planned — indicating the spacecraft had successfully docked.

This six-hour jaunt was exponentially faster than the normal two-day adventure that astronauts and cosmonauts typically take to get to the ISS. That’s because, while the live-in orbiter is a mere 400kms from Earth, it’s always moving — so it’s not a simple matter of going from Point A to Point B.

That’s why it has traditionally taken so long to get there, with the spacecraft going round the Earth every 90 or so minutes, which works out to about 16 total before docking.

But this go around, the Soyuz only orbited four times before hooking up with the space station.

“We’re trying to cut that amount of time that they had to be in those close quarters,” NASA spokesman Kelly Humphries said, noting the spacecraft has a basic bathroom but little living space. “… They may be sharper now, if they’d have to take over the docking.”

The Soyuz TMA-08M spacecraft blasts off from Kazakhstan’s Baikonur cosmodrome early on March 29.

The NASA spokesman explained that equipment and computer software upgrades, among other factors, helped to make Thursday’s historically fast flight possible. And it’s possible space officials might decide that the longer, old-fashioned way — allowing the crew to get its space legs over two days, however cramped they might be — is preferable, depending on how this mission goes, Humphries said.

This pioneering, fast-track crew was made up Pavel Vinogradov and Aleksandr Misurkin from Russia’s space agency, as well as NASA astronaut Chris Cassidy.

With their voyage complete — and once the space station’s hatches open for them, scheduled for soon after midnight — they’ll have plenty of time to get comfy: They are scheduled to remain on the orbiter for about six months before heading home.