Earth-like planet discovered – and it’s a ‘mere’ 4.2 light years away 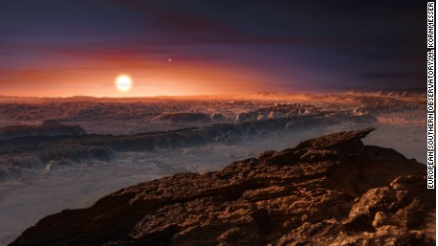 In a discovery that has been years in the making, researchers have confirmed the existence of a rocky planet named Proxima b orbiting Proxima Centauri, the closest star to our sun, according to a new study. It is the closest exoplanet to us in the universe.

Given the fact that Proxima b is within the habitable zone of its star, meaning liquid water could exist on the surface, it may also be the closest possible home for life outside of our solar system, the researchers said.
Because of its location, the researchers hope it provides an opportunity for possible “robotic exploration in the coming centuries.”

This artist’s impression shows a view of the surface of the planet Proxima b.
“The good news is that it is so close,” study author Ansgar Reiners said. “It is not only nice for having it in our neighborhood, but it’s a dream come true for astronomers if we think about follow-up observation.”
Proxima Centauri coexists with a binary star in Alpha Centauri, a well-studied star system that serves as a neighbor to our sun.
Proxima b is a mere 4.2 light-years away from our solar system, or 266,000 times the distance between the Earth and the sun, which are 92.96 million miles apart. Previous rocky exoplanet discoveries, like those orbiting ultracool red dwarf star TRAPPIST-1, were previously described as “close” at 40 light-years away.
“It’s not only the closest terrestrial planet found, it’s probably the closest planet outside our solar system that will ever be found because there is no star closer to the solar system than this one,” said lead study author Guillem Anglada-EscudÃ©.
“The only thing you can hope to find between that is Planet Nine, but that would (require) a solar system object or a brown dwarf that hasn’t been discovered,” researcher Pedro Amado added.
Here is what we know about the planet, as well as the questions that researchers hope to be able to answer…
[Click here to go to CNN.com to read the rest of the story]
– CNN.COM

Many thanks Gavin, the headline has been updated. Apologies about that!