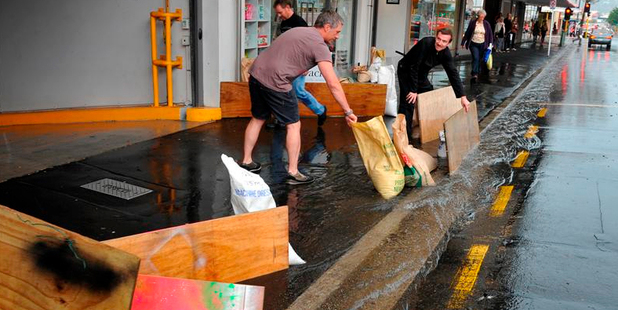 A brief deluge yesterday had central Dunedin on standby again as the mop-up continues from a storm on Monday that overwhelmed the city’s stormwater system.

Contractors were out inspecting drains and the entrance to the Wall Street mall complex in George St was sandbagged in case yesterday’s forecast storm had the same results as Monday’s.

But while the water on the west side of George St rose rapidly from 2.40pm as 8mm of rain fell in 10-15 minutes – compared with 30mm in 30 minutes on Monday – it drained away without incident.

Wall Street mall manager Regan Bennett said sandbags and sheets of plywood were used to direct the water away.

“I think we might have to think about a more permanent solution if this is going to keep happening.”

On Monday, Dunedin was lashed by a one-in-50 year event that led to water flowing through about 20 businesses, mainly in George St.

Passing vehicles pushed water from flooded streets into shops while water flowed from the street into one store due to a problem the DCC is going to fix.

The council is also to consider whether drilling holes in drain covers would help divert water more directly to the drain in such situations.

DCC roading maintenance engineer Peter Standring said the stores were affected by water that overwhelmed city stormwater mains. He said it was appropriate for water to collect on roads in such situations, as long as it flowed away in the end, but not for it to flow into private property.

Contractors and council staff had investigated the issues at the corner of St Andrew and George Sts, where water flowed into clothing store Jay Jays, and would rectify the problem.

Yesterday, a similar issue appeared to be looming at the opposite corner of the same intersection – St Andrew St is an open drain for water flowing down from York Pl so flow is particularly heavy there during a downpour – but was relieved when a contractor lifted a drain cover.

Rings and Things retail assistant Stacey Fraser, who stood with a mop, towels and buckets as the water began creeping towards her doorway again yesterday, said a T-shirt, toothbrush, mop head and a hairdresser’s spritzer bottle emerged from the drain as the water flooded towards her door.

She was upset the council had not done anything about the problem previously, saying “the DCC should keep the drains cleaner”. Mr Standring said the issues both days were related to the stormwater mains being too full to take any more water, rather than any blocked drains. Mud tanks were checked before the rain on Monday and again afterwards.

A massive amount of rubbish washed into Dunedin’s CBD drains and mud tanks every day and a tank could contain rubbish again minutes after it was cleared, Mr Standring said.

An item such as a supermarket bag, caught up in rapidly-flowing water, could slow water flow significantly if it covered a grille. The city’s mud tanks were checked and cleared regularly – some weekly, others monthly – and all were monitored in between.

“The cause of all this is not how good or bad the drains were; it’s the fact the main stormwater drain was chocker,” Mr Standring said.

A stormwater system big enough to cope with that much water could be built but whether it was worth the cost to cope with rain events which happened two or three times a year – was questionable, when the system coped most of the time.

Mr Standring said temporarily closing the road, to prevent traffic pushing stormwater into premises, was impractical, because by the time a message got through the problem was usually over.

The council took any damage seriously and after each flood tried to improve different aspects of the network to prevent it recurring.