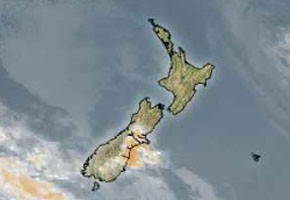 This would have to be the warmest part of the country today, I’m also seeing a few unofficial 19 and even 20 degree temperatures about the city. No doubt of course due to the foehn northwesterly airflow currently over the region.

The South Island is looking good for most although there is a fair amount of high cloud about Canterbury and Otago, winds are light. Nelson and Marlborough is experiencing sunny weather however. Cloudy on the West Coast especially south of Westport with showers generally south of about Hokitika although I can see a few have sneaked north just past there. Southland is dry with areas of high cloud and northwesterly breezes.

Temperatures look to be in the mid teens for most this afternoon in the South Island although a tad lower in Central Otago and along the West Coast. The combination of high cloud not letting the sun in and a northeast breeze is making it a little cooler in Christchurch about now although it did reach 15 degrees around 1pm. The stand out of course being Dunedin where those warm northwest winds are making things quite pleasant down there.