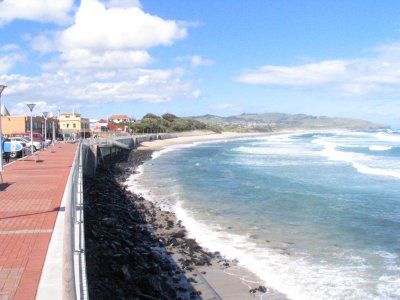 The spotlight is on Dunedin today and also briefly inland parts of Otago, as we continue our look into the nation’s cities and what weather elements they endure year after year.

The climate of Dunedin in general is temperate, however the city is recognised as having a large number of microclimates and the weather conditions often vary between suburbs mostly due to the city’s topographical layout. It is also greatly modified by its proximity to the ocean.
This leads to warm summers and cool winters. Winter can be frosty, but significant snowfall is uncommon (perhaps every two or three years), except in the inland hill suburbs such as Halfway Bush and Wakari, which tend to receive a few days of snowfall each year.
Spring can feature “four seasons in a day” weather, but from November to April it is generally settled and mild. Temperatures during summer can reach 30 °C.

Dunedin has relatively low rainfall in comparison to many of New Zealand’s cities, with only some 750 millimetres recorded per year. Despite this fact it is regarded by many as a damp city, probably due to its rainfall occurring in drizzle over a larger number of days (northern centres such as Auckland and Wellington receive more rain overall through heavy downpours on relatively fewer days).
Dunedin is one of the cloudiest centres in the country, recording approximately 1650 hours of bright sunshine per annum. Prevailing winds in the city come from two directions, with cool, damp southwesterlies tending to alternate with northeasterlies.
Warmer, dry northwest winds are also characteristic Foehn winds from the northwest. The circle of hills surrounding the inner city shelters the inner city from much of Otago’s prevailing weather, often resulting in the main urban area having completely different weather conditions from the rest of Otago.

Inland, beyond the heart of the city, the climate is sub-continental: winters are quite cold and dry, summers hot and dry. Thick freezing ground fogs are common in winter in the upper reaches of the Taieri River’s course around Middlemarch, and in summer the temperature frequently reaches into the mid-30s Celsius.

City rainfall at Musselburgh is about 800mm per year, but surrounding areas range from under 700 at the airport to 950 at the Gardens and over 1200 in higher elevations to the west and southwest. While there are more days of very light (< 1mm) rainfall than in some northern centres, the number of days with 1mm or more averages 119, compared with 123 at Kelburn and 129 at Auckland Aero. Sunshine (as a % of the possible) has no clear seasonal pattern, and the difference between the relatively sunniest and cloudiest months is only 4-5%.

This article is interesting but it’s certianly not your original work. There is probably a good argument to suggest you should at least quote the following as the source