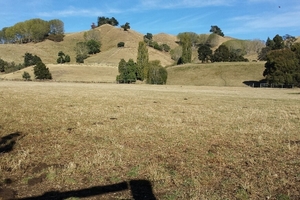 Farmers dealing with a second year in a row of parched weather might not receive financial assistance, but will gain “psychological relief” with the announcement of an adverse event being declared, Federated Farmers say.

The event has been declared for Northland’s west coast after dry weather since November.

Forecasters have predicted the region will stay dry until next month.

The Ministry for Primary Industries said the situation was a “serious concern”.

Federated Farmers Northland provincial president Roger Ludbrook said the drought announcement would give the rest of the country “an inkling” of what farmers in the area had been going through.

“The big thing a declaration triggers is the Northland Rural Support Trust, so any farmer can approach the RST for free advice on farm management, or just someone to have a decent chinwag with,” he said.

“Beyond this, it doesn’t mean much financially unless the absolute worst happens. There is a safety net, but it is exactly the same as for any other New Zealander and carries the same eligibility rules.

“Then there is Inland Revenue and to be fair to them they aren’t unapproachable.”

While the immediate solution was rain, over the medium term, farmers should start looking at drought-resistant pastures, Mr Ludbrook said.

“In the longer term, drought prone regions like Northland should have water strategies in place because New Zealand doesn’t suffer from a water shortage issue, just a water storage one.”

Primary Industries Minister Nathan Guy said the drought announcement reflected the tough few months they had had as pasture browned off.

“Cyclone Lusi has helped green tinges appear in some places, but the rainfall was erratic and insufficient. Western Northland and large parts of the Waikato remain very dry.”

Conditions did not yet meet the criteria for the Government to declare a medium scale adverse event, he said.

“This is because the drought conditions are localised, and we haven’t had a formal request to make such a declaration. A range of support is currently available to farmers and most are managing to cope.”

“Banks also play a key role when things get tough on farms, and I’m pleased they are encouraging farmers to contact them and discuss their situation if facing difficulties.”

I stand to be corrected by someone who knows better, but I am doubting the affected land from last year got to recouporate enough to cope with this years drought.

The farmers who had to re-seed their paddocks last year would be needing a good two years of fussy management for those grasses to mature to provide adequate nourishment, and be rooted strong enough for the stock to graze.

If any farmers did re-seed all that effort and money will be down the tubes now, I would say.