Dry rolls on but when’s the next rain? 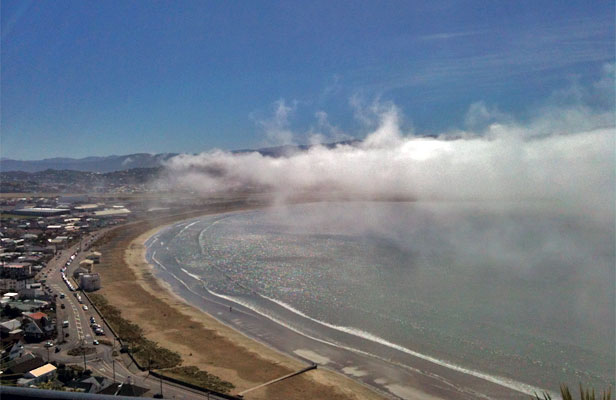 There’s a risk of pockets of showers over isolated parts this week but the big player remains an anticyclone over us.

Looking further ahead and late next week a couple of fronts are looking to cross the country so in ten days time there’s some hope of a couple of bands of rain or widespread showers. It potentially signals the chance of more rain bearing fronts arriving but still anticyclones are in the mix.

Focussing on our current situation and one area is the cloud bank flanking many eastern coastlines during the evening, night and early morning.The upper north isn’t immune to it either in places.

It’s expected to lighten up during the day with some sunny spells but the risk of drizzle can’t be dismissed over eastern parts of the North Island, mainly about Gisborne and Hawkes Bay. There’s a chance of more widespread showers for a time this week as the easterly picks up and delivers more cloud across the Far North with an isolated shower a chance there.

Northeasterly breezes are also likely about eastern coasts and working its way inland just a little.

Tonight for areas under cloudy skies it should be a little milder than usual however those seeing the stars this evening and the full moon, it’s looking considerably cooler.

With the end of February now in sight the rest of the week is appearing largely dry again but some warm days aren’t out of the question.

Inland areas and western parts look mild and despite the nor’ easter picking up out east temperatures should warm up a little throughout the week.

There’ve been some comments from readers in urban areas not recalling such a sunny and warm summer with one saying”It’s the best Canterbury summer in 60 years”.

WeatherWatch.co.nz also confirms that many up and down the country have seen more sunshine and pleasant days for the first time in years for such an extended period but still the cry for rain goes out as the country continue to dry out even further.

Homepage image of low cloud, just off the coast near Wellington