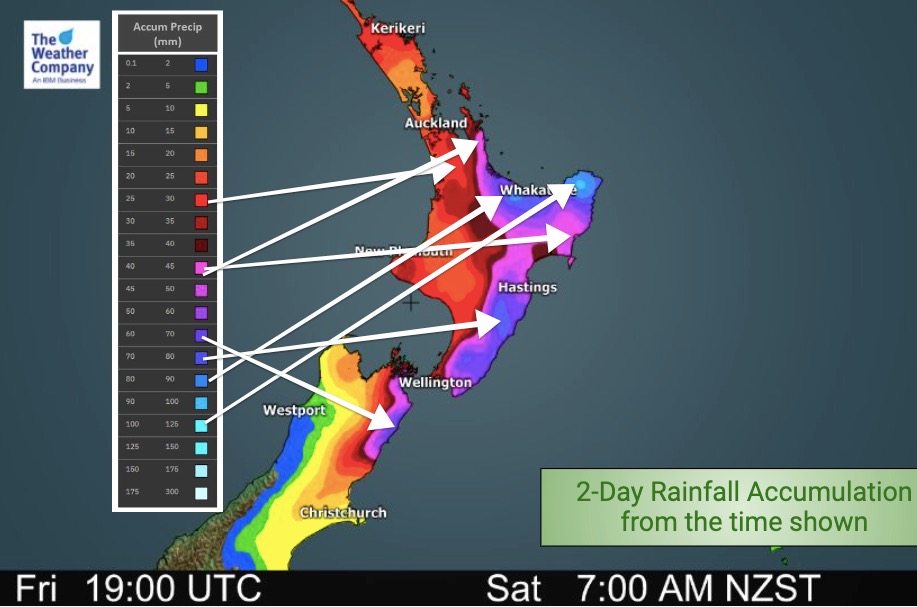 A large low is moving in this weekend and brings heavy rain risks into both main islands, with northern and eastern areas most impacted.

Areas most exposed to heavy rain will be Bay of Plenty, Kaikoura area and now we’re pleased to add Hawke’s Bay to the list. Hawke’s Bay is incredibly dry at the moment with drought conditions dominating into the winter months. While showers have brought hit and miss short term relief the long term impact of the drought has been noticed a lot more now that winter has arrived.

The rain coming this weekend will be patchy but the areas with heavy falls will be slow moving,

Latest estimates show Sunday to be a wet day, with 40mm forecast for Hastings, with another 13mm or so falling on both Saturday and again on Monday, bringing the potential total to around 65 to 70mm. There are similar totals just down the road in Dannevirke and just up the road in Eskdale. In fact, Eskdale may have over 80mm low down and over 100mm higher up in the ranges. There may be some wiggle room with these numbers, +/- 20mm in totals. As a general rule of thumb, if the rain band slows down the totals can even double in some locations, but if it speeds up then the totals can halve. For now, the rainfall totals above are the best thinking by IBM’s super computer, Watson, and the totals in your local WeatherWatch forecast are updated each and every hour.

The most accurate and detailed rainfall forecast can be found at RuralWeather.co.nz and also in the HOURLY portion of your LOCAL WeatherWatch.co.nz forecast.