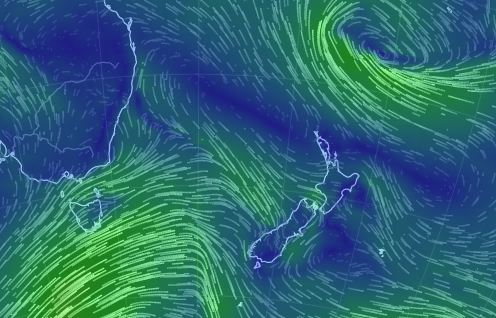 Much like the beginning of a bobsled race, it’s all downhill from here, after a beautiful weekend in parts of the country, prompting some record breaking garden centre transactions in Auckland particularly.

The South Island is looking at a grim old Tuesday in parts though, with the aforementioned downhill run in weather starting tomorrow and lasting through until at least Thursday. A west to northwest airflow lies over the country with a front moving northwards during the day over NZ, reaching the upper North Island in the evening.

Starting in the wettest part of the country, the West Coast is looking at some very heavy falls, accompanied by thunderstorms, which should start out strong and ease towards afternoon and evening. On the east coast, it’s looking much calmer, with warm northwesterlies and high cloud clearing in the afternoon.

Cup day in Christchurch is looking fair, though the winds will gust relatively strongly at times – and showers developing south of Banks Peninsula along the coast as winds tend southwest. These showers could even be heavy in places with thunderstorms and hail – but will clear overnight.

And way down south, Otago will see morning sun dissolve into showers from afternoon, some heavy – with thunderstorms and hail just like their Canterbury cousins. Southland is similar, though the showers will come in a little earlier, as that system moves its way north.