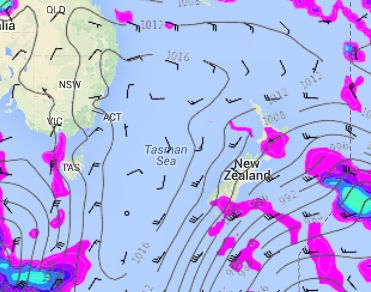 If you’re tired of the windy weather, the unsettled weather and the cold snaps – you can blame our friends on the other side of the Tasman Sea…well, sort of.

While technically the weather has a mind of its own one can’t help but notice that the large highs this summer have mostly been around the eastern side of Australia – this has been feeding them an exceptionally hot northerly flow while on the other side of the high (which is the NZ area) we’re getting the colder sou’west flow.  This is why parts of southern Australia are hitting over 40 degrees while southern New Zealand is struggling to even hit the teens today.

Highs – also known as anticyclones – have an anticlockwise wind flow in the Southern Hemisphere.  So when the highs are centred around the western Tasman Sea the wind flow for Aussie is often northerly while our flow is south-westerly.

However some Australians may not be enjoying their heat wave – so while we can blame Australia for hogging all the heat, Australians might blame us for not taking some of the heat off their hands….. if only it was that simple!

Would glady take the heat, Australia.. rather than see  any more of this winter like material of domme and gloom – Am  so sick and tired of the winds and cloud coverings etc.. stop hoging and give us a summer we should have.. and to hell with the farmers too,  they can never be pleased no matter what time of year/day/month it is.. they are always filled with complaints!

These cold sou- westly flows arent good on the beach no matter which end of the country your at. Its rather spoiling summer to be honest.

I know you Ozy’s dont like to take any blame but there is no need to blow smoke in our faces. It does make a food sunset though.

The Aussies are already blaming us (sorry but I didn’t save the link). Our sub-antarctic pattern is blocking the highs mid Tasman so that a) they intensify the hot northerly flow from the interior of Oz and b) those same highs are smashing up against a brickwall here. It does look hopeful that this pattern of the past 6 weeks is about to break by this time next week when we may see an anti-cyclone straddle NZ so that summer can be deemed to have arrived in earnest for the rest of the country as opposed to the N.I. east coast!

This shock wave of this southerly is so sureal for this time of the year. The Hawaiian surfers will enjoy this out of season blast from the south when it arrives up their way in due course more than anyone else.

Swell generated in the NZ

But not Hawaii..too many islands in the way dispersing it

As 1 ft long period swell though)