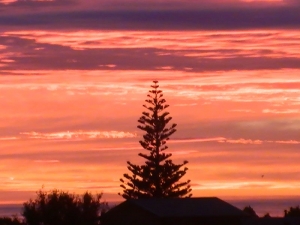 With the news of the large Tasman sea low about to gobble us up this weekend is that enough to persuade you that the coldest months of the year are finally here?

We’re just over a fortnight into winter and less than a week out from the shortest day and yet reports of lambs and blossom appearing over parts of the country could make some of us think that an early spring is upon us.

Overnight lows across central and northern regions have been resembling early September figures and daytime highs have been nudging the 20 degree mark off and on for numerous centres across the North Island over the last few days.

It’s important to remember we believe that the coldest weeks of the year are traditionally the four to six week period after the shortest day so perhaps we’re being lulled into a false sense of security.

This large low which is about to be with us for a few days should bring snow to many skifields and being so early on in the season this can only be good news but the the snow altitude is again what we’d expect to see in early to mid spring.

Looking into the crystal ball and it seems this coming week could see cooler days arrive with Auckland struggling to get the low teens on a couple of occasions and single figure highs could prevail over southern and eastern areas of the Mainland from Christchurch to Invercargill as well.

Now rainfall totals are looking quite heavy in eastern areas tomorrow and northern parts of both islands.and then a colder south to southeasterly surge is possible mid to late week bringing snow to low levels about some eastern areas of the South Island. We’ll keep monitoring this situation.

Frosts have been noticed by their absence and comparing it to this time last year they’re almost non existent across the country as a whole. Sure there’ve been pockets of them but the big crunchy ones have yet to consistently appear.

It might be time to make the most of the weather as long range its looking more unsettled over us but if it stayed relatively mild there might not be too many complaints.
We suggest not to hold your breath though as this coming week appears to be the coldest of 2013 so far.

spring bulbs coming up in the garden

Just noticed blossoms coming out in rangiora this morning! Been hardly any frosts with reasonable temperatures – although today was chilly.