Home > News > Did the weather help bring down Air Fran...

Did the weather help bring down Air France airliner? 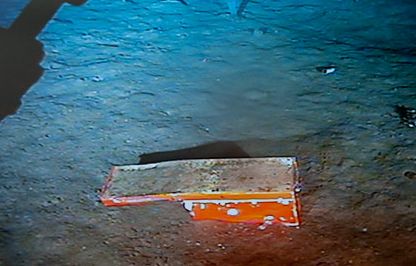 The memory unit that may tell why an Air France jet plunged into the Atlantic nearly two years ago was recovered from the bottom of the ocean Sunday, France’s Bureau of Investigation and Analysis (BEA) said.

A remote-controlled submarine, known as the Remora 6000, located the memory unit Sunday morning and it was lifted on board the search ship Ile de Sein six hours later, the Paris-based BEA said.

All 228 people aboard the Air France Flight 447 were killed when the plane fell into the ocean on the way from Rio de Janeiro to Paris on June 1, 2009.

The submarine found the orange-colored flight data recorder’s chassis Wednesday, the second day of an operation that also hopes to retrieve bodies from the wreckage site. The memory unit was part of the recorder, but was not attached when it was found.

The finds come more than three weeks after search teams found the tail section of the Airbus A330.

“We hope that the BEA, in charge of the technical investigation, will be able to provide answers to questions that relatives of the victims, Air France and the entire airline industry have been asking for nearly two years as to why this tragic accident occurred,” the airline’s statement said.

A British aviation consultant said he is skeptical about how useful the memory unit will be to investigators, considering it has been sitting between 2,000 to 4,000 meters (6,562 to 13,124 feet) below the ocean’s surface for 23 months.

“If you were to throw a computer into the ocean, imagine how all the parts would eventually split and you have the corrosive effects of seawater and the depths involved,” Phil Seymour, chief operating officer of the International Bureau of Aviation, said Thursday.

“It may be that the more wreckage they find will help them to piece it all together, which bit by bit could help them build a picture of what caused the plane to come down,” Seymour said.

Martine Del Bono, a spokeswoman for the Paris-based BEA, says there is a good chance the memory unit, which records any instructions sent to the aircraft’s electronic systems, will still hold retrievable data.

The Airbus A330’s pilots lost contact with air traffic controllers while flying across an area of the Atlantic Ocean known for constant bands of severe turbulence, officials said.

But exactly what caused the plane to plunge into the sea has remained a mystery, with only small portions of the wreckage and a handful of bodies found in the remote area where it went down.