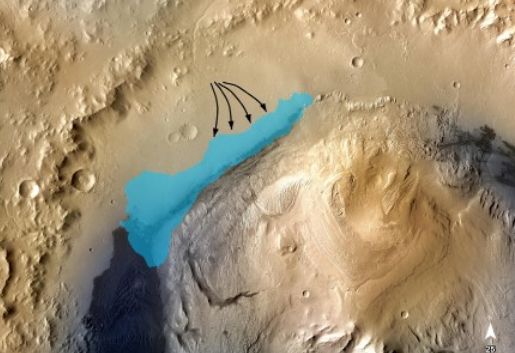 Curious about life on Mars? NASA’s rover Curiosity has now given scientists the strongest evidence to date that the environment on the Red Planet could have supported life billions of years ago.

Since Curiosity made its rock star landing more than a year ago at Gale Crater, the focal point of its mission, the roving laboratory has collected evidence that gives new insights into Mars’ past environment.

NASA scientists announced in March that Mars could have once hosted life — at least, in the distant past, based on the chemical analysis of powder collected from Curiosity’s drill. An area of the crater known as Yellowknife Bay once hosted “slightly salty liquid water,” Michael Meyer, lead scientist for the Mars Exploration Program at NASA headquarters in Washington, said earlier this year.

Six new studies released Monday by the journal Science add more insights about these formerly habitable conditions and provide other new knowledge that increase our understanding of the Red Planet. The results were also presented at the fall meeting of the American Geophysical Union in San Francisco.

Curiosity found evidence of clay formations, or “mudstone,” in Yellowstone Bay, scientists said Monday. Martian mud is a big deal because this clay may have held the key ingredients for life billions of years ago. It means a lake must have existed in this area.

“This is a game changer since these are the kind of materials that are very ‘Earth-like’ and conducive for life,” said Douglas Ming, lead author of one of the new studies.

This ancient environment, where the clay minerals formed, would have been favorable to microbes, Ming told CNN.

Some bacteria on Earth called chemolithoautotrophs could have lived in that kind of environment. These bacteria derive their energy from breaking down rocks and sediments, Ming said, generally by oxidizing elements in the rock.

Ming and colleagues also found hydrogen, oxygen, carbon, nitrogen, sulfur and phosphorus in the sedimentary rocks at Yellowknife Bay, elements that are all critical for life.

Grotzinger and colleagues found the habitable environment existed later in Martian history than previously thought. By studying physical characteristics of rock layers in and near Yellowknife Bay, they determined that Mars was habitable less than 4 billion years ago — about the same time as the oldest signs we have for life on Earth.

The habitable conditions could have remained for millions to tens of millions of years, with rivers and lakes appearing and disappearing over time.

Curiosity also helped scientists figure out the age of an ancient Martian rock, as described in the new research. The rock is called Cumberland, and it now has the distinction of being the first whose age was measured on another planet through chemical analysis.

The rover used a method for dating Earth rocks that measures the decay of an isotope of potassium as it slowly changes into argon. Scientists determined the rock was between 3.86 billion and 4.56 billion years old. This age range is consistent with earlier estimates for rocks in Gale Crater.

Scientists say roughly 4 billion years ago, the environment on Mars wasn’t much different from that of modern-day Earth. But things on Mars then took a drastic turn, and the planet was dramatically transformed from warm and wet to bitterly cold and dry, scientists say. In addition to the cold and dry conditions, scientists say the No. 1 reason life probably wouldn’t have thrived on Mars is its extremely high levels of radiation.

“The radiation environment on Mars is unlike anything we have on Earth,” said Jennifer Eigenbrode, a biogeochemist and geologist at NASA’s Goddard Space Flight Center and an author of one of the studies. “We don’t know if life on Mars could have ever adapted to the high levels of radiation the surface is currently experiencing.”

Eigenbrode added, “This is a wide-open book, which we have barely started writing the pages of.”

New radiation measurements will also be important to planning any human missions to Mars, scientists said.

“Our measurements also tie into Curiosity’s investigations about habitability,” study co-author Don Hassler of Southwest Research Institute in Boulder, Colorado, said in a statement. “The radiation sources that are concerns for human health also affect microbial survival as well as preservation of organic chemicals.”

Organic chemicals come from a variety of sources, including meteorites and comets, but they can also be indicative of life.

What’s bad for us is bad for signs of life — but these organic chemicals could still be hiding on Mars nonetheless.