Home > News > Developing low could linger for a week...

Developing low could linger for a week 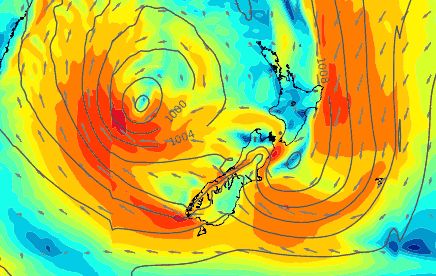 We’re used to hearing of highs that can roll in for a week – although maybe not so much this year – but lows rarely linger for that amount of time, because they’re usually faster moving and smaller in size.  But a low being predicted by WeatherWatch.co.nz forecasters next week may linger for several days in the Tasman Sea.

The low is forecast to develop this weekend near Cape Reinga.  It will deepen quickly on Sunday and the models suggest it will track due south – towards the South Island’s West Coast – but bringing rain and wind to the north as well.

The models used by WeatherWatch.co.nz, courtesy of MetOcean, are predicting the low could splinter in two by Tuesday – with a centre just east of Kaikoura and the main centre several hundred kilometres over the Tasman west of Taranaki.

It’s the Tasman Sea low which may then linger for a number of days.

It may not feed in rain for the whole week but is likely to bring in much warmer northerlies – which could promote afternoon heat showers and even thunderstorms inland.

By mid to late week it will start to drift northwards again – actually taking it away from New Zealand and allowing sunnier weather to spread across at least two thirds of the country.

However by next weekend the low may well curve back to the upper North Island – bringing yet another wet weekend to northern New Zealand.

And despite an incoming high behind it – the easterly flow may linger for the rest of March in the top quarter of the country.

Other models are also picking this next low could turn into yet another Tasman Sea storm – so we’ll keep you posted over the coming days.

Maybe we should request a three-day winter for lost-summer compensation!!!

Just wondering if you mean much warmer northerlies for the North Island only next week and maybe not for us southerners?

Hi NH – it should be for all of NZ for a time – then later in the week will become more NI focused – the only problem for southerners will be if it tilts north east – which is cooler for eastern areas (but in saying that, will make for warmer nights).