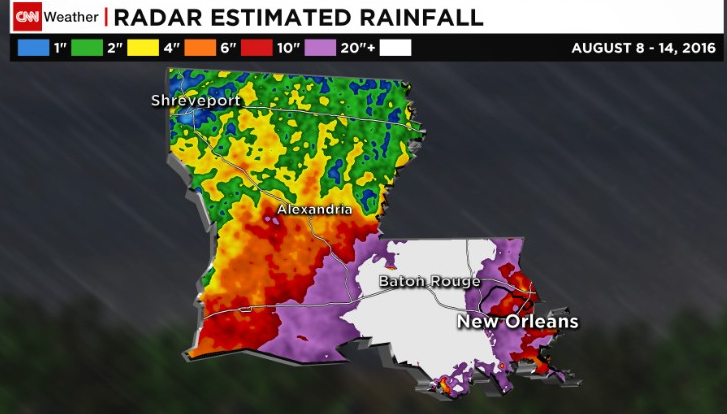 The catastrophic flood devastating Louisiana is now the worst natural disaster to strike the United States since Hurricane Sandy four years ago, the Red Cross said.

“Thousands of people in Louisiana have lost everything they own and need our help now,” said Brad Kieserman, the Red Cross’ vice president of disaster services operations and logistics.

“This disaster is the worst to hit the United States since Superstorm Sandy, and we anticipate it will cost at least $30 million — a number which may grow as we learn more about the scope and magnitude of the devastation.”

The calamity struck quickly and ferociously. In one part of Livingston Parish, more than 787mm of rain fell in 15 hours.

“I bought enough food to last for a week in case we were flooded in, but I wasn’t prepared for this much devastation,” said Jo Lee Misner, who lives in the Livingston Parish community of Colyell. “Local stores are running low on everything from food to fuel.”

At least 36 of her relatives have lost their homes — all 13 of them.

“It’s unbelievable what we’ve been through,” she said. “We never imaged this would happen.”

And it’s not over. At least 13 people have died across five parishes. And with more rain forecast, the destruction could mount.

See the full report from CNN + video by clicking here

– On August 29 2005 New Orleans and Louisiana were hit by historic Hurricane Katrina.

Not to belittle the event but it sounds so much worse when put into litres, must be the new method of sensationalism.

Hi there – it’s simply a fact. The fact that it is a sensational figure ties in with this being a major historic flood event and has nothing to do with sensationalism.  It’s not about how much rain fell at a single weather station as per your figure (which is stunning too!), it’s about how much water has fallen over this entire state during this significant historic flood event.

It may be a fact and it is a terrible flood but, you take a metric that is not normally used, it looks big and scary but we have nothing to compare it with and you present it as a the headline, is that not sensationalism.

Hi there, no we don’t think so. Where is it written this metric cannot be used? You are conflating individual weather stations which record in mm/inches and the total volume of water received over this entire state which is measured in litres/gallons. If you’re reporting on how much rain fell at YOUR PLACE you would be correct in using mm/inches – but when talking about total volume of water over an entire region that is a different subject – it would not be appropriate to use mm/inches. The statistic can absolutely be used and the fact events like this don’t happen often is the reason why headlines aren’t often like this. Just because WeatherWatch.co.nz presents a fact in a new way does not make it sensationalism or exaggerated. If you don’t like our style you are more than welcome to use MetService.com or NIWA which your taxes both fund, we are entirely free.  We stand by the facts and sources in this story and the use of these facts to better explain how significant this historic event was – one that is so significant the President will cut short his holiday to visit the state.