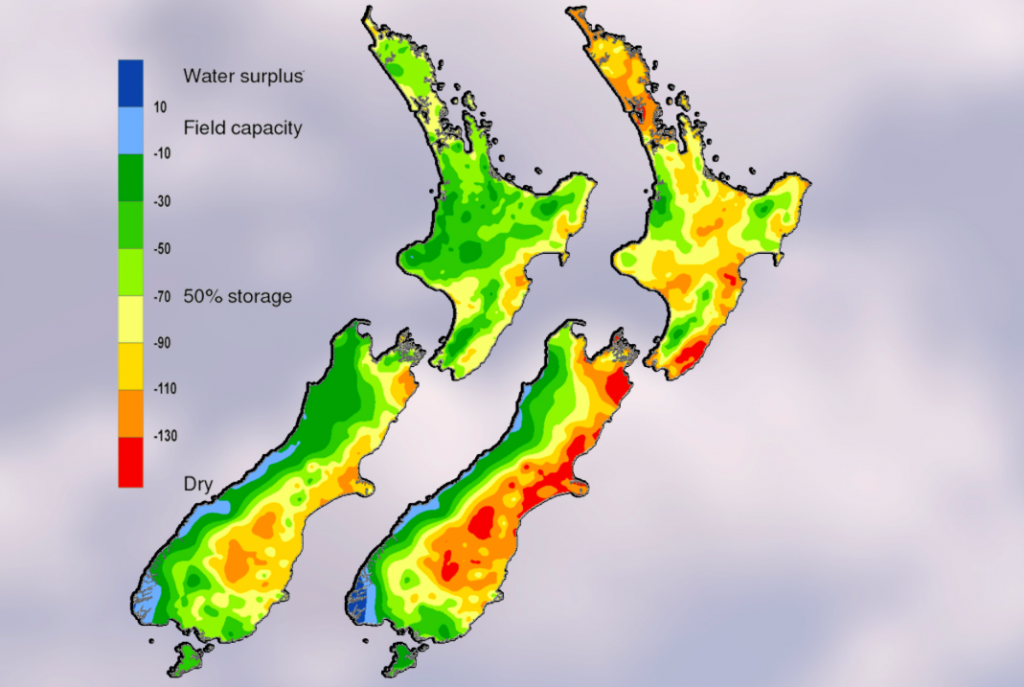 Drier than average soil conditions are clearly showing up in the latest nationwide soil moisture maps, provided by Niwa – and farmers in the east are asking WeatherWatch.co.nz when the rain is coming.

As we head into the hotter summer months ahead WeatherWatch.co.nz is now making a call as to the areas most concerning.  Through the extensive work we do at CountryTV and via WeatherWatch.co.nz the farming and growing communities across New Zealand are sharing conditions where they are, on top of the soil moisture maps.

The soil moisture maps only cover the weather stations – then computer modelling ‘fills in the gaps’.  However with New Zealand’s mountainous, changeable, terrain/geography we find localised thunderstorms and downpours (like we saw in Canterbury on Sunday) can produce significant rainfall events that may not hit a weather station, to be recorded.  And same thing goes when a downpour hits a Niwa weather station, but not your farm 1km away. So WeatherWatch.co.nz reaches out on a daily basis to rural New Zealand to ask and listen to how conditions are where you are.

Based on that, this is what we’ve found as we reach the half way mark of December.

THE DRIEST REGIONS:
CANTERBURY is clearly having a tough time this year, having been in drought for most of 2015. South and North Canterbury have missed out on many rain events.  Hopefully Tuesday and Wednesday this week will see a few more downpours – but long range we aren’t seeing any big rain events on the horizon.  For now, thunderstorms and southerly changes are your best bet for precipitation.

OTAGO, MARLBOROUGH and WAIRARAPA are also very dry now – much drier than average and it is concerning so early in the season.  These regions are typically dry in summer, but drier than average before summer has really begun can mean serious headaches later in the season and heading into Autumn.  We do see some rain and showers for Wairarapa and a little into the other regions too – but like Canterbury, no big rain maker in the next 10 days.

The Silver Linings:
Afternoon thunderstorms: While sometimes dangerous, can produce great rain.  The downside – hail, tornadoes and flash flooding which can damage crop or kill stock.  But for the most part afternoon thunderstorms, or afternoon downpours, can often be a welcome surprise in these four driest regions.

El Nino Southerlies – These don’t create huge rain events, but they do see weekly showers (for now anyway) coming into eastern NZ, especially nearer to the coastline.  This changeable weather pattern can be healthy.  In fact, parts of Otago are benefiting from it (those closer to Southland and the West Coast where it’s wetter than usual this December).

We’re not trying to make up good news – just laying out the facts from previous summers, as farmers & growers in dry times need realistic and probable/possible silver linings.

THE OTHER DRY REGIONS
The big dry is creeping.  Some regions received great October and November rains which reversed an earlier dry.  However we are now seeing this creep back across the North Island.

WeatherWatch.co.nz is concerned at the growing dry pattern that runs in a line from about Northland to Hawkes Bay, in a north west to south east direction.

In an El Nino summer these regions can often fail to get western rains, which run out of energy around Taranaki northwards. In fact, most farmers/growers know that a south west front with “rain” in summer, often means “a cloudy day with a few showers” in places like Waikato northwards.  So this dry trend, so early in the season, is a concern to us at WeatherWatch.co.nz – and is the reason we’re launching our “RainWatch” feature as of next week, to regularly track the rainmakers over the dry weeks ahead.

Further down the island and Wanganui to Central Plateau is also drier than average. Hopefully El Nino westerlies will fix this, but the south to south west flow can be dry for this area with the Southern Alps in the South Island blocking the rain makers to this part of the southern North Island.

SOIL MOISTURE MAP as of 9am MONDAY DEC 14th 2015 – Data via Niwa, graphic via CountryTV 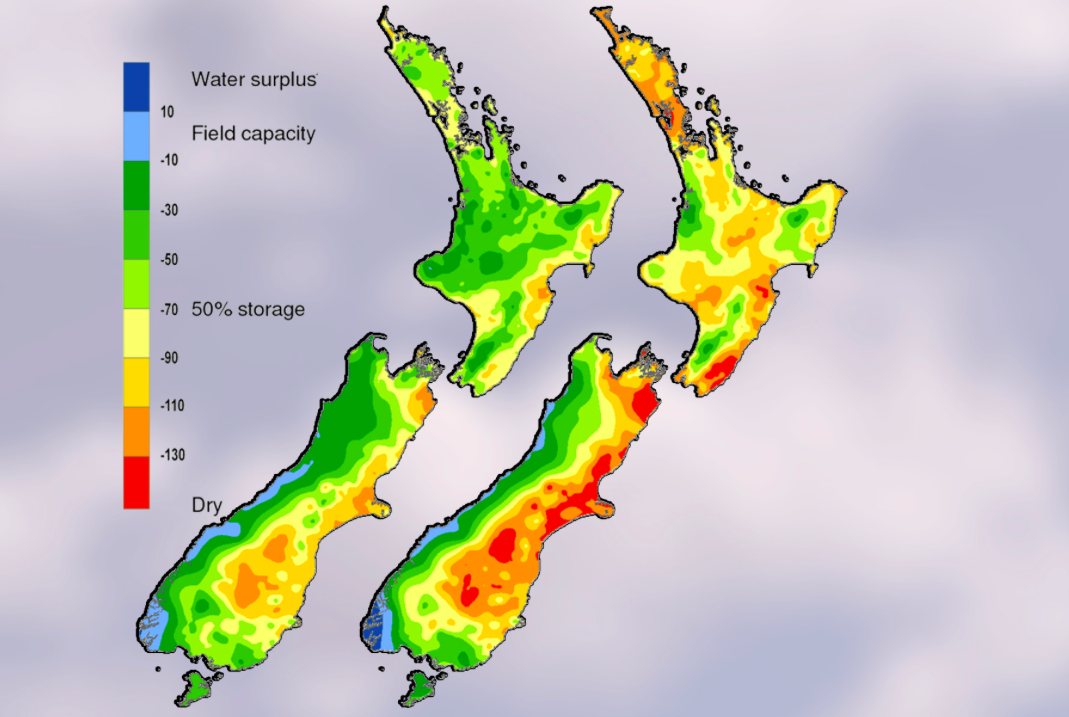