Home > News > Detailed NZ-wide forecast for the week a...

Detailed NZ-wide forecast for the week ahead 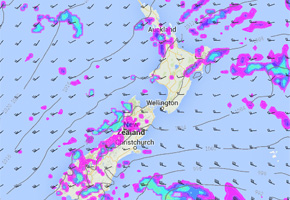 The coming week starts off unsettled and for many holiday markers will mean a wet end to ANZAC weekend, or alternatively it could be a great day to chill and watch an excessive amount of movies or do other indoor activities.

A low organises itself over the South Island on Monday with a front moving over the North Island, all regions will experience rain for a time with heavy rain for some especially for the Tasman, Nelson and Marlborough regions during the morning then many western parts of the North Island early afternoon. As a southerly change moves onto the South Islands east coast south of Banks Peninsula this could bring a few heavy falls too in the afternoon or evening.

Strong winds will be something to watch also, northeasterlies over the North Island will be strong before a front moves in this afternoon then winds change to the northwest. Watch for gales in exposed areas for much of the North Island mainly in the west this morning and early afternoon then mid afternoon onwards in the east. Nelson and Marlborough in the South Island could see strong northeasterly winds during the day too then easing this evening, coastal Canterbury sees southerly winds becoming strong about the coast in the evening.

On to Tuesday and we see conditions calm down a bit but itâ€™s not a pleasant day, occasional showers expected across most of New Zealand with a risk of thunderstorms even nudging their way in during the morning from Taranaki through to Northland in the west. Cool southwesterly winds, gusty for the western North Island at times during the day.

A gusty west to southwesterly airflow lies over the country on Wednesday, this time round we have mostly sunny weather in the east although a few showers creep along the South Islandâ€™s east coast in the afternoon reaching Banks Peninsula by evening. Showers for much of the day in the west of both islands. Nelson, the Bay Of Plenty and eastern parts of Northland may remain dry for much of the day with mostly sunny skies being more sheltered from the westerly quarter airflow.

Thursday is calming down a little, still a cool southwesterly airflow over the country though with a few showers about. Showers mainly affecting southern parts of the North and South Island, also in the west from western Waikato through to Northland.

Friday is looking much better especially in the east of the country where sunny conditions are likely with light winds, in the west there is still a niggling southwesterly airflow to deal with but a high in the Tasman Sea bringing promise of settled weather which looks to arrive next weekend.