Home > News > Detailed break down for second half of w...

Detailed break down for second half of week 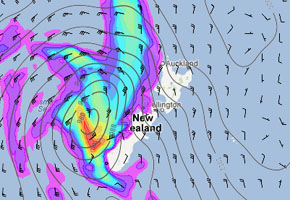 Today’s weather will be what it will be but how is the rest of the week looking for New Zealand? A potential weather bomb in the mix later in the week and westerly influenced weather are a simple way to look at things. Lets investigate the potential day by day. 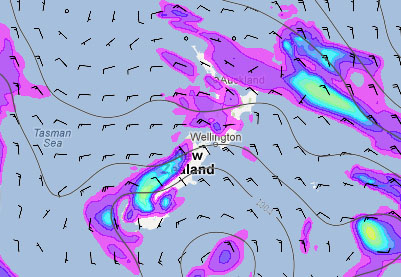 This Wednesday an area of low pressure currently lying over the South Island will weaken and move away to the southeast of the country, a moderate westerly airflow lies over New Zealand with a weak ridge slowly approaching from the west in the Tasman Sea. It will be mostly cloudy for western areas of the North Island with west to northwest winds, showers develop late morning then ease off in the afternoon for most however may linger on the west coast itself till evening. The east coast being sheltered by the ranges to the west will have dry and warmer weather.< Rain is likely to affect the West Coast of the South Island. The east coast north of about Ashburton and including Nelson looks like it will have mostly sunny weather with light winds, in South Canterbury and Otago expect a few areas of cloud and the chance of some showers in the afternoon as a southwesterly flick moves through. Expect cloudy areas in Southland with southwesterlies developing, it may remain dry till night however. 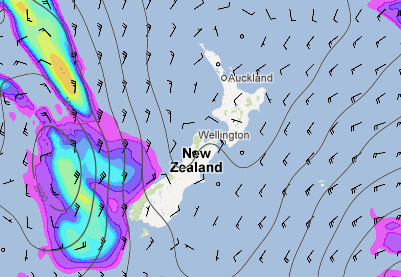 Step forward to Thursday, the ridge in the Tasman will get closer and move over the North Island during the day so a mostly sunny day with light winds looks to be in store for the whole of the North Island. The ridge will provide nice and sunny weather for the South Island also bringing light winds, morning cloud and the odd drizzle patch about Southland and coastal Otago clears however. On the West Coast a northeasterly airflow will start to pick up with some increasing cloud in the afternoon, rain in Fiordland from evening. 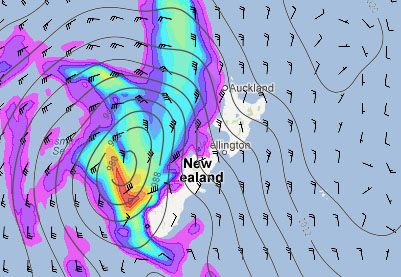 Come Friday a north to northwesterly airflow will pick up across the country as this low pressure system deepens in the Tasman and quickly moves towards to the West Coast of the South Island. Cloud will increase across the North Island with showers developing in the west from evening. Rain with torrential falls is possible on the South Island’s West Coast later in the day with very strong northeasterly winds, rain is likely to move a fair way east of the main divide at night. The east coast itself will remain dry although plenty of thick high cloud is on order. Southwesterlies will start to develop in Southland and Otago later in the day bringing showers.

Hopefully the weather plays ball with your plans for the rest of this week. This weekend is looking very much like a southwesterly type of weekend then early next week a ridge finally may bring a setteled spell of weather.