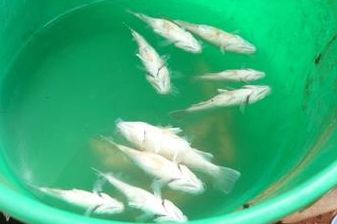 A town in the northern Australian desert has been pelted in a downpour – of fish.

Marine life tumbled out of the sky on two occasions last week, raining down on the Northern Territory town of Lajamanu, about 550km southwest of Katherine. The town is hundreds of kilometres from lakes and the coast.

The Northern Territory News reported yesterday that resident Christine Balmer did a double-take as the fish – believed to be small spangled perch – fell from the sky.

“Locals were picking them up off the footy oval and on the ground everywhere. These fish were alive when they hit the ground.

Weather bureau senior forecaster Ashley Patterson told the Northern Territory News that a tornado in the nearby Douglas Daly region may have been responsible, although no twisters had been reported.