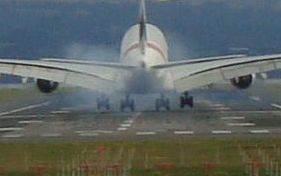 Seven of Europe’s leading aviation companies have joined forces to warn the European Union’s plans to charge for carbon pollution are jeopardising 2,000 jobs and billions of dollars of orders from China.

Airbus and six large European airlines said the plan to bring global airlines into the EU emissions trading scheme for carbon dioxide, which the industry has steadfastly opposed, is creating an “intolerable” threat to the European aviation industry by opening up the possibility of trade battles with China, the US and Russia.

“[The ETS issue] started out as a discussion over environmental legislation but is turning into a trade conflict,” an Airbus spokesman said. According to Airbus and its airline partners in Europe, three state-owned Chinese airlines are refusing to finalise orders for 45 Airbus A330 long-haul jets worth up to $12bn.

Their argument was outlined in letters to European political leaders, including Britain’s David Cameron, Germany’s Angela Merkel, France’s François Fillon and Spain’s Mariano Rajoy . The campaign was orchestrated by Tom Enders, chief executive of Airbus, and backed by the chairmen or chief executives of British Airways, Virgin Atlantic, Lufthansa, Air France, Air Berlin and Iberia. The heads of Safran of France and MTU of Germany, two big makers of aerospace engines, also signed the letters.

The EU’s plan to regulate the output of carbon dioxide, as part of the effort to combat global warming, has stirred concern in the European aviation industry. Airbus — which employs more than 50,000 people across Europe — argues the proposals will damage competitiveness at a time of economic weakness, wants the EU to “put on hold” the extension of the scheme to airlines until a global plan for regulating carbon emissions by airlines can be agreed.

China, the US and other nations are concerned that the remit of Europe’s ETS will require airlines to pay a charge related to carbon emissions even when flying outside European airspace.

The industry executives also said they expect “suspensions, cancellations and punitive actions” by other countries to grow “as other important markets continue to oppose [the extension of] ETS”.

Airbus said half of the 2,000 jobs threatened by the stalled Chinese orders were located at its own plants in France, Germany, the UK and Spain, with the rest parts suppliers.

A spokesman for Connie Hedegaard, Europe’s climate commissioner, reiterated the bloc’s determination to press ahead with the scheme next year, but added the EU was “keen on exploring the different possibilities and flexibility that the legislation allows”.

Last week Wu Haidong, China’s ambassador to the EU, called the new ETS rules “hasty”. However, officials in Beijing have refrained from making public comments, saying the decision to buy Airbus aircraft is a commercial matter for Chinese airlines.