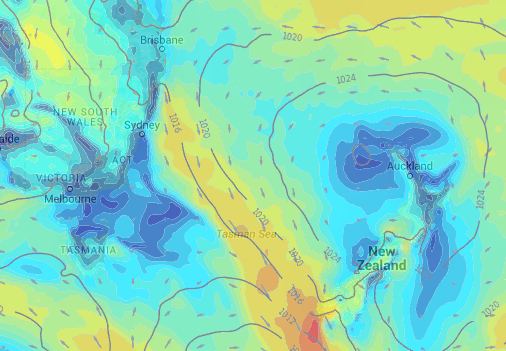 Tomorrow it’s looking unsettled again, as December’s unusually cool start continues – a northwest airflow sits across most of the country, and a cold coutherly front is about to enter the frame from the afternoon.

Most of the island will alternate between periods of cloud and the odd sunny spell, with westerly winds gusting strong at times – especially for areas south of Taranaki.

A light shower or two might move through in the day for parts, but otherwise the whole island stays mostly dry.

Northland will enjoy a mostly sunny day, with just moderate westerly winds to speak of, as the anticyclone sitting to our northeast will stick around for northern parts.

The East Coast of the North Island is looking dry with some high cloud and breezy northwesterlies, (a little gusty about the Wairarapa).

Wellington can look forward to cloudy periods and some gusty northwesterlies. Overnight a southerly change moves onto the lower North Island, which will bring some rain.
Cook Strait could see winds gust to gale from afternoon from the northwest.

Cloudy skies in the west will turn to rain during the day – “fairly standard West Coast stuff” -according to forecaster Aaron Wilkinson.

Nelson and Marlborough are in for a breezy kind of a day, with west to northwest winds posing a few issues (gusty in the afternoon for Marlborough) – though mostly sunny with only high cloud, until a late southerly change should bring rain.

For Otago and Canterbury expect high cloud and northwesterly winds first thing, becoming gusty inland.
Winds change southerly around midday for Otago, then mid to late afternoon in Canterbury -bringing a period of first rain, then easing to showers.

Those northwesterly winds about inland Canterbury and inland Marlborough will be fairly gusty – perhaps strong at times – in exposed areas.