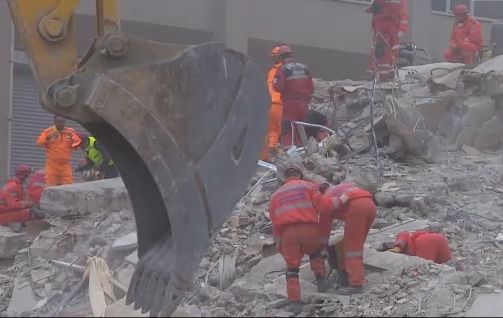 The death toll from Wednesday’s 5.6-magnitude earthquake in eastern Turkey has risen to 40, the government said Sunday.

Twenty-six people have been rescued as a result of Wednesday’s quake.

Freezing temperatures were expected to continue Sunday, with a bit of warming ahead Monday and Tuesday.

“It’s not possible for us to survive the winter here. The Van winter is very cold and there’s a lot of snow. Living in these shelters is impossible,” Cezmi Fazla said.

He stood outside a small hut his family constructed out of Styrofoam and plywood.

The hut was on the road outside Fazla’s house, which was still standing but badly damaged after the earthquakes. Ten to 15 family members slept in the hut every night, including his wife and youngest child, as well as his father and brother.

“We haven’t gotten any aid,” he said. “We got a lot of support from the people of Turkey, packages with everything from clothes to toothpaste. But the elected officials, the nongovernmental organizations are not making good use of it and were not good at coordinating those efforts. So people feel very panicked. That’s made a lot of people uncomfortable.”

Frustration from earthquake survivors is palpable on the streets of Van, where almost all of the shops are closed after the earthquakes.

“I condemn Tayyip Erdogan,” yelled Muhsin Tarhan, referring to Turkey’s prime minister. He was walking down the street with his wife and six children looking to scavenge plastic and wood to build a shelter.

“We have been buried in the rain, and snow and cold and Recep Tayyip Erdogan does nothing. He only helps those who are supporters of his political party.”

There is a deep distrust of the Turkish state among many of Van’s ethnic Kurdish residents.

In interviews with CNN, many residents even challenged the government’s 5.6 magnitude rating of Wednesday’s earthquake, claiming it was secretly downgraded, even though the U.S. Geological Survey reported an identical 5.6 magnitude.

Southeastern Turkey lies along turbulent geological and ethnic fault lines. For decades, the region has been the main battlefield of a long-running guerrilla war between Kurdish separatist rebels from the Kurdistan Workers Party (PKK) and Turkish security forces.

On Thursday, tensions boiled over just yards from the rescue operation near the rubble of the Bayram Hotel, when a small crowd of protesters confronted Turkish government officials, demanding the resignation of the Van governor.

Journalists were assembled awaiting a press conference with the prime minister. But after Erdogan met with disaster relief officials for more than an hour, the press conference was canceled, without explanation.

Two Turkish journalists were among the dead from Wednesday’s quake.

Sebahattin Yilmaz and Cem Emir with the DHA news agency had been covering the aftermath of the 7.2 magnitude quake. They were buried in the rubble of the five-story Bayram Hotel, which collapsed on Wednesday.

A Japanese volunteer who had traveled to Turkey to assist with recovery operations was among other casualties of the demolished hotel.