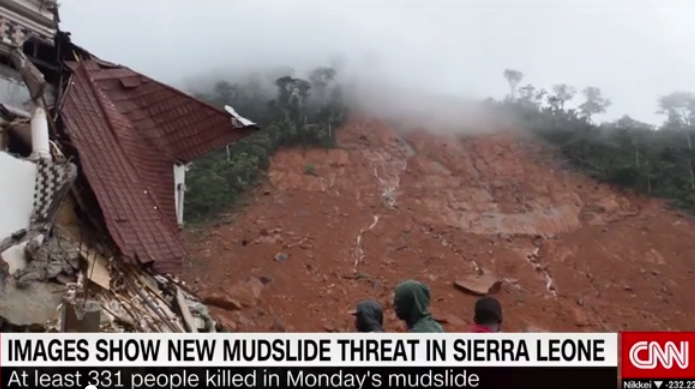 As of Thursday, 419 bodies have been recovered from beneath the mud and rubble on the outskirts of the West African nation’s capital of Freetown, Tourism and Cultural Affairs Minister Sidie Yahya Tunis said. On Thursday, 413 people laid to rest in a mass burial in the nearby town of Waterloo, Tunis said. About a third of the deaths were children, he said.

A satellite image from DigitalGlobe shows the mudslide that has devastated the Freetown area.
The city morgue at Connaught Hospital in Freetown has been overwhelmed by the influx of victims in one of the deadliest natural disasters to hit Africa in recent years.
The crisis began Monday when heavy rains caused mudslides from the denuded slopes of Mount Sugar Loaf, about 5 miles from Freetown. Houses that hugged the slopes, many of them little more than wooden shacks with tin roofs, were buried after torrents of mud poured down under the force of the water.
Rescue workers told CNN they were losing hope of finding whole bodies in the debris, with 600 people still unaccounted for. Some body parts have washed up on nearby beaches.
Many appeared shell-shocked in the wake of the disaster, crying as they walked along or looked for missing loved ones. One woman told CNN she had lost most of her family, including a sister who was heavily pregnant.
Another resident, Ishmael Tomboyeke, said he was also looking for his sister’s body. After seeing the mudslide, he said, “I ran there, I saw where the house was, everything was demolished.”
Meanwhile, authorities are preparing to evacuate other hillside areas amid concern more landslides could take place.
“Evacuation is being discussed. Some have been happening but not on a large scale,” Tunis said. “We have to plan, and we are working at looking at the numbers involved.”
Between 2,000 and 3,000 people also have been displaced, Abu Bakarr, spokesman for the Red Cross in Sierra Leone, told CNN earlier this week.
The displaced are sleeping outside “because there are not enough shelters for everybody,” Elhadj As Sy, secretary-general of the International Federation of Red Cross and Red Crescent Societies, told reporters in Geneva, Switzerland.
He said that Sierra Leone was facing a crisis “way beyond (its) capacity” and appealed to the international community to ramp up its support.
More rain is expected over the next few days, increasing the threat of a new landslide, Tunis said Thursday.
“At this point, more hands are needed on deck, both locally and internationally. The gravity is huge, and the magnitude is just so much for this nation to handle. I pray that other countries will come in to assist,” he said.
– CNN.com has more on this developing story.