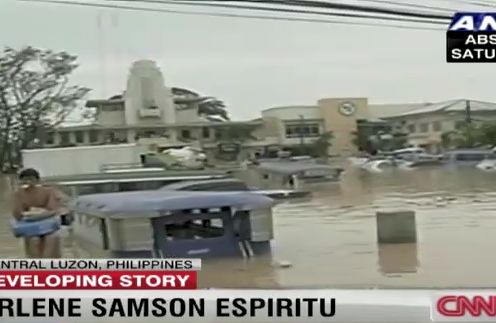 The death toll from twin typhoons that pounded the Philippines has reached 59, authorities said.

Typhoon Nesat, known locally as Pedring, has claimed 55 lives, and the death toll from Nalgae, known locally as Quiel, rose to four today as rescuers found the body of a man who drowned in raging floodwaters in Bulacan province.

Several towns in Bulacan and Pampanga provinces, in Central Luzon, were under chest-deep water when continuous rains from Typhoon Nesat last week prompted the release of water from four dams around the area. Among the worst hit was the city of Calumpit, Bulacan, where residents were stranded on rooftops for days.

Although floodwaters have begun to subside, hundreds of families remained in evacuation centers as more than 43,000 houses were damaged by Typhoon Nesat alone, the National Disaster Risk Reduction and Management Council said. It estimated damages to infrastructure and agriculture at more than 8 billion Philippine pesos (almost $183 million).

Several dikes have also been breached in Pampanga province during Typhoon Nesat.

Typhoon Nalgae, which made a landfall on Saturday morning, aggravated the damage from Nesat as it cut a swath of destruction along the upper regions of Luzon island, directly hitting the crop-producing provinces of Isabela and Cagayan as well as the Cordilleras.

Landslides from Typhoon Nalgae cut off portions of a major highway, isolating the town of Carranglan in Nueva Ecija.

A passenger van headed toward Bontoc, Mountain Province, encountered a landslide along the Halsema Highway, resulting to the death of one person, the disaster agency said.

By Monday afternoon, Nalgae had weakened to a tropical storm. But Nalgae still threatened to bring heavy rainfall and strong winds to China’s Hainan island on Tuesday and is expected to dump heavy rain on coastal Guangxi province in the next two days, the state-run Xinhua news agency said.