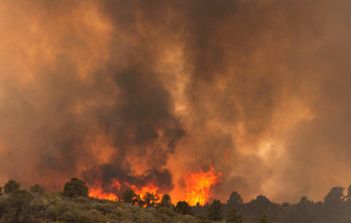 Firefighters determined to snuff out a wildfire that killed 19 of their colleagues scoured the scorched earth near Prescott, Arizona, on Wednesday, searching for smoldering vegetation that could reignite and further spread the deadly Yarnell Hill blaze.

The nearly 600 firefighters and support workers assigned to the fire paused only to observe a moment of silence in honor of the 19 members of the Granite Mountain Hotshots, who died Sunday when the fire took a sudden unexpected turn.

The pause coincided with the movement of a convoy of vehicles driven to the fire by the Granite Mountain team. The vehicles are being returned to Prescott, where they were based.

To start the moment of silence, a loud alert tone sounded on firefighters’ radios and an unidentified fire team commander announced, “As the crew carriers for the Granite Mountain hot shots leaves the Yarnell Hills fire and begin their journey home, all personnel in the incident will observe an operational pause, in observance of our fallen comrades.”

Nineteen firefighters, part of an elite group called the Hotshots, died while battling a wildfire about 85 miles northwest of Phoenix on Sunday, June 30.

“It makes this fire much different from the other fires we fight, and I think people really want to put this thing to bed and get rid of it,” he said.

Wittington said he expected good progress on the fire and no further loss of life, but he said smoldering vegetation driven under and, in some cases, into crevices of rocks could quickly reignite under the right conditions and cause a sudden flare-up.

The fire was offically listed as 8% contained Wednesday.

The possibility of thunderstorms Thursday afternoon offered little promise of putting out the fire, Whittington said. Not only is much of the wood and grass that the fire could burn sheltered from the rain by boulders and other terrain features, thunderstorms bring the possibility of lighting and high winds that could spread the flames, he said.

With so much of the work focused on ground work, four U.S. Air Force C-130s brought in Tuesday from firefighting duties in Colorado will likely not be needed to fight the fire Wednesday, Whittington said.

The aircraft, normally stationed in Colorado and California, are equipped with special firefighting gear that can dump 3,000 gallons of fire retardant in less than five seconds.

Families who were forced to evacuate because of the fire could be allowed back on their property by Saturday, Whittington said.

Earlier in the week, the Yavapai County Sheriff’s Office advised residents in the communities of Peeples Valley and Yarnell to evacuate their dwellings. An estimated 200 homes and other structures have burned in Yarnell.

But first, fire crews have to ensure that no embers are still burning near the homes and that the areas are safe for people to permanently return. Utility crews also must reconnect service, Whittington said.

“There is is still a lot of work to do around the structures,” he said.