Deadly storms hit Asia while US prepares for TS Don 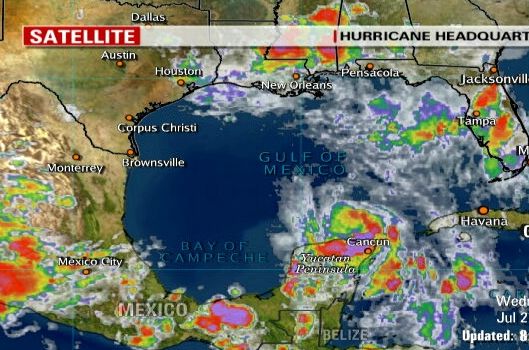 We have extensive coverage of three storms around the world in including two storms in Asia which have killed dozens of people in South Korea and, the Philippines.  Meanwhile a tropical storm has formed in the Gulf of Mexico.  Tropical Storm Don isn’t likely to be a hurricane when it makes landfall in Texas on Saturday NZT and some forecasters say it spells good news for the drought stricken state.

tropical storm moving through the Philippines on Wednesday has killed 27 people and left more than 60 injured or missing, according to a government disaster response agency.

The slow-moving storm continues to drag through northern parts of the island nation at about 10 mph (16 kph). It is expected to cross into parts of the Northern Luzon island Wednesday night, the agency said.

Though winds have decreased slightly, the agency warned against gusts of up to 60 mph. The government has been tracking the storm since it intensified from a depression Monday.

Several barangays, or villages, have been flooded, and rescue efforts are under way to find missing people, the agency said.

Government officials held an emergency meeting Wednesday to assess and coordinate their response to the storm damage.

Officials cautioned residents in low-lying areas and mountainous regions about flash floods and landslides, while coastal regions have been warned about storm surges and deadly waves.

The storm is expected to continue to bring widespread rain throughout the Luzon island until the end of the week, the agency said.

Massive downpours in South Korea — the heaviest rains in a century — are blamed for 35 deaths, according to the country’s Central Disaster Relief Agency.

Heavy rain was still falling Thursday morning across parts of the country. It was raining in some areas around Seoul at a rate of two inches an hour (50 millimeters an hour) and was expected to continue Thursday.

The most recent numbers released by the Central Disaster Relief Agency indicated that much of the death toll comes from landslides triggered by the rain. In Chuncheon, 13 people were killed by landslides, while 15 were killed by the same phenomenon in Seoul. Five people were still missing, the agency said.

Five neighborhoods on the outskirts of Seoul were under evacuation orders.

But officials were able to restore electricity to many thousands of homes that had lost power. Earlier, there were 116,000 homes without power, said the agency. Early Thursday, that number stood at 1,190.

Earlier, the agency warned that hundreds of families had lost their homes.

The weather caused major traffic disruptions across portions of the country as well.

The Korea Meteorological Agency issued a special heavy rainfall alert for cities in the center of the country. The forecast called for the downpour to continue at a rate of 60 millimeters (2.4 inches) per hour over the next day.

South Korea typically experiences a rainy season during the summer.

Tropical Storm Don has developed over the southern Gulf of Mexico with maximum sustained winds of 40 mph, the National Hurricane Center said Wednesday.

It was moving to the west northwest near 19 kilometers per hour (12 mph). It was expected to continue traveling northwestward over the next 48 hours.

If it continues on that path, it should approach the coast of the northwestern Gulf of Mexico on Friday.

Earlier Wednesday oil companies with off-shore platforms in the Gulf of Mexico were taking precautions amid threatening storm forecasts for the area around Mexico’s Yucatan Peninsula.

The Shell company has begun securing current well operations in the extreme southwestern Gulf of Mexico and evacuated some people Tuesday and Wednesday.

“Our total expected evacuated personnel is approximately 70 people,” the company said. “These personnel are not essential to core producing and drilling operations and will not be able to perform their normal work functions during the passing storm conditions. Production is not expected to be affected at this time.”

Chevron said it was monitoring the system.