Deadly rips – how to beat them 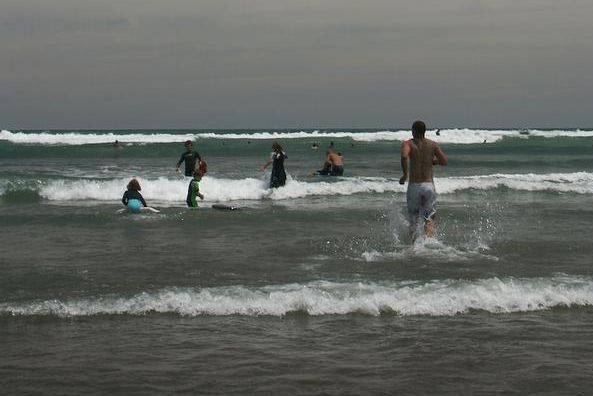 Hight had a GPS locator strapped to his helmet and was covered with electrodes and sensors. He looked like an astronaut said his colleagues.

During the experiment Hight encountered what is known as a “pulsing rip”. It appeared quite suddenly at a spot that had been calm only moments before the rip developed.

Several sets of large waves pounded the popular surf beach and when the pulsing rip sucked Hight out to sea he was travelling at four metres a second.

“Much, much faster than anyone could ever swim,” says Giovanni Coco, a former Niwa oceanographer who has dedicated his research to predicting rip formations.

To get an idea of what this means you need to consider that a world champion freestyle swimmer, such as American Michael Phelps, can swim two metres per second in a calm swimming pool, around half the speed Hight was pulled in the rip.

Dr Coco’s test gave hard figures to a fact that was well known – it is impossible for a recreational swimmer to compete against a rip.

Rips are the biggest killers in our waters. Of the 14 people who have drowned in New Zealand since Christmas, at least five were killed after being caught in rips, with several more close calls. Swimmers die because they exhaust themselves fighting against the current.

Research developments in the last two years, in New Zealand and abroad, have begun to spell out the difficulty in giving hard-and-fast safety advice for swimmers and predicting where rips will occur.

The science of the surf zone is relatively young – its basic physics were only solved in 1971. For decades rips were thought to wash straight out to sea like a fast-moving, straight-sided river, and this influenced the safety tips given to swimmers.

New studies show rips might actually double back towards the beach, and if swimmers simply tread water they should be returned to shore.

So how robust is this theory, and can it contribute to a solution to New Zealand’s poor record on drownings?

To test the belief that rips retreated from the beach in a straight line, Californian oceanographer Jamie MacMahan, from the Naval Postgraduate School, placed 30 GPS-holding, floating devices within a surf zone at a Monterey beach. He found that the locators floated out with the rip then followed a horse-shoe direction back to the beach, and concluded that rips acted like giant, eddying whirlpools with 80 to 90 per cent of the currents remaining within the surf zone. He told the New York Times: “I have jumped in a lot of rip currents all over the world and always end up back onshore.”

As a result of his research, he gave this advice to American media: “If you swim parallel to shore – the traditional recommendation – you have a 50-50 chance of swimming into a strong current and becoming exhausted.

“But if you don’t fight it and just tread water, you have an 80 to 90 per cent chance of the rip current conveyor belt returning you to shore in three to six minutes. Many experienced surfers know this, and even talk about ‘riding the rip’.”

He said treading water in a rip can actually be a calm experience. “Folks always ask me what it feels like. The answer is … nothing. Rip currents are similar to rivers. If you have ever floated downriver by tubing, you do not notice the flow until you look at the bank to estimate your speed, but you feel nothing. Only when you miss your end spot or want to take a break and start to swim back up river do you notice the current.”

The MacMahan study has been noted, but not adopted by water safety officials in New Zealand. The safety advice given by Surf Life Saving New Zealand for someone caught in a strong current is not to panic, to ride the rip out to sea, then swim parallel to the beach for 30m to 40m to escape it.

New Zealand experts say the American study shook up traditional knowledge, but it is too early to change the our rip safety guide.

Niwa coastal oceanographer Terry Hume, who has mapped hundreds of New Zealand beaches for hazards, said: “The advice … is not a lot of use if a rip is running parallel to the beach.”

But he stressed that Professor MacMahan’s theory was still being tested, and Surf Life Saving’s official advice remained sound. Besides, local research showed that rips came in many forms – some currents did wash straight offshore like a conveyor belt, while others were highly complex.

A colleague of Dr Coco’s, Karin Bryan, and other experts have begun to decipher what sort of coastlines have straightforward, river-like rips and which ones have meandering, messier currents.

The body of promising rugby league player Sonny Fai was never found after he was swept out to sea by a rip at Bethells Beach in 2009.

The rip currents at these wide, fine-sand beaches are mostly predictable. The flat seabed and heavy wave column means the rips usually form channels which wash straight out to sea. The rips are also stronger because of the larger swells.

East Coast rips are more difficult to spot. The beaches are steeper, gravel-bottomed, and create unusual surf zones because the waves strike the beach, then rebound off sandbars, reflecting at odd angles to the beach.

Dr Bryan says these coastal observations are only simple guides, and other factors such as tides, La Nina and El Nino cycles, and changing seabeds means there are no fail-safe scientific guides to rip currents. She says beachgoers could note that if waves were approaching shore in an oblique way – with crests colliding or arriving at the beach at an angle – then more complex, eddying rips might be expected.

Dr Coco has also found predicting rips is an imprecise science. A National Institute of Water and Atmospheric Research (Niwa) initiative at Tairua, on the Coromandel Peninsula, helped surf lifesavers to forecast rips five days before they arrived. But this was possible because Tairua’s rip formations were relatively constant, and the slice of coastline had been intensely studied for 10 years.

A smartphone application is being developed in the United States which shows swimmers where rips are on popular beaches in real time. But the technology depends on a wealth of data – only two beaches in New Zealand would have enough information to create a forecasting system.

Dr Coco, now working in Spain, says he is impressed with New Zealanders’ awareness of dangerous currents. But another finding in his study at Ngarunui Beach has shown that being able to spot a rip from the sand is not enough. “In a lot of cases when visually we would have expected [Mr Hight] to be dragged out, the velocities were not that large and nothing actually happened.”

And when the lifeguard was sucked out to sea, there was often no rip visible to the scientists.

Dr Bryan adds: “We’ve always thought that rip currents tend to lie in these channels in the [seabed], where you can’t see any breaking patterns – that’s how you recognise a rip.

“But more and more … we’re finding out that rips are more flash events.

“So you might get a pulse of a rip current where you least expect it which lasts one or two minutes and then disappears. They’re not as predictable as we had hoped.”

It’s little wonder that rips are so dangerous.

Surf Life Saving New Zealand general manager of programmes Brett Sullivan says rips, and the fast-moving water around rip currents, are responsible for a very high proportion of rescues on surf beaches, of which there are 1400 a year.

Statistics show the at-risk group is males, Maori or European, aged between 15 and 24.

Two weeks ago, a young man who nearly drowned at another Coromandel spot, Hot Water Beach, described that hopeless feeling of being caught in an insidious rip to the Weekend Herald: “As we swam about four metres to the shore, we got [pulled] back about 20m. Then we understood we were in trouble. We got… 100m away from the shore.”

After floating on his back for 20 minutes, he “lost hope” before shouting for help.

Despite scientific breakthroughs on rip formations, the central part of the safety advice remains the same: “Don’t panic”.

Hight, who now runs a consultancy company, told the Herald this week: “The stress comes when it’s not anticipated. People like feeling connected to the shore and in control. So you’ve got to prepare people with the right thought processes.”

Having swum in hundreds of rips, he says being washed 200m offshore was a far better strategy than fighting an invisible current.

“Of course …” he points out, “You can always just swim between the flags.”