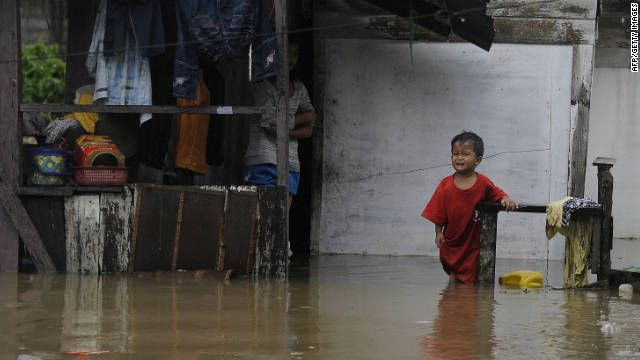 Flooding ravaged parts of southern Thailand yesterday, with residents there joining their countrymen in Bangkok and beyond struggling with the effects of high water.

Parts of Songkhla province were declared disaster zones a day after rushing water swept away a 3-year-old child, So Hemakul, a provincial disaster and mitigation official, told the state-run MCOT news agency. The child’s body was found Thursday.

Heavy rains led Songkhla Gov. Winyu Thongsakul to urge residents of 16 districts to brace for flooding. Already, more than 360 people in the area have been forced to evacuate due to water as deep as 2 to 4 meters (6.5 to 13 feet) in places.

Still, though the situation threatened to worsen, the scale of personal and economic devastation paled compared to that elsewhere in Thailand, including areas in the central part of the Southeast Asian nation such as Bangkok.

Earlier this week, the government reported on its website that 17 provinces — at that point, not yet including Songkhla — were experiencing severe flooding.

The damage already done this season has prompted an extensive, and expensive, government effort. On Thursday, the Flood Recovery and Restoration Committee requested nearly 13 billion baht ($415 billion U.S.) for various projects to help flood-ravaged areas, according to the government’s website.

This figure represents just a fraction, though, of the overall damage done. Atchaka Sibunruang, the secretary-general of Thailand’s board of investment, estimated that 2,919 of his organization’s corporate entities — worth 620.8 billion baht — had suffered.

This has trickled down to reflect Thai workers, like the nearly 3,800 workers from 14 companies laid off at flood-hit plants in Ayutthaya, that province’s labor chief, Wannarat Srisuksa, told MCOT.

Meanwhile, tensions have remained high — and, at times, have boiled over — as residents rail against the government’s action, and perceived lack of action, in flood control efforts. Some of the greatest concerns have been in Bangkok, which has been suffering from high-water woes for weeks.

On Wednesday, for instance, several residents in Pathum Thani blocked a tollway and damaged cars while expressing their discontent, Prime Minister Yingluck Shinawatra said Thursday, according to MCOT.

The Thai leader set deadlines for governors and federal officials to work together to assess priorities and reach solutions about how best to mitigate flooding, at minimal pain and expense to citizens.

That includes possibly taking down some of the so-called “big bag barriers” that have been set up around the area. Yingluck said there are more ways to drain floodwater, including installing new pumps, and thus satisfy citizens’ demands.

Still, dismantling “big bag barriers” may carry risks. On Thursday, inner Bangkok was put on “high alert” due to fears that getting rid of one such barrier could cause water levels to rise significantly, Deputy City Clerk Chumphol Sampaopol told MCOT.

Bangkhen District Chief Watcharaporn Kawayapanik said, though, that water levels generally had remained unchanged. That said, water along one key road still was under 60 to 80 centimeters (24 to 32 inches) of water.