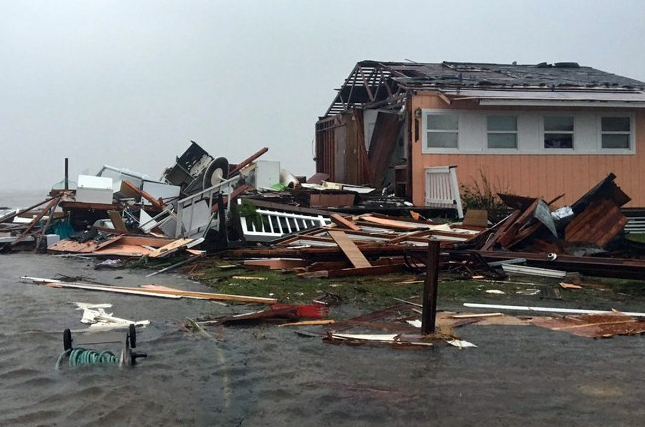 The first fatality from Hurricane Harvey was reported in the hard-hit Texas city of Rockport, Aransas County Judge Burt Mills said Saturday afternoon. The victim died in a house fire during the storm. “We didn’t know about it until today,” he said. At least 12 people were injured.

Texans who rode out the most powerful hurricane to hit the United States in a decade ventured out Saturday to find “widespread devastation” as Hurricane Harvey lumbered north in what was “now turning into a deadly inland event.”
With dire warnings of tornadoes, torrential downpours and days of flooding to come, broad swaths of southeast Texas were littered with uprooted trees, toppled signs, flagpoles that snapped like toothpicks and clusters of bricks peeled like scabs from walls and rooftops.
Fatalities were feared in coastal Rockport, Texas, where an estimated 5,000 residents had stayed put for the storm that blasted ashore as a Category 4 around 11 p.m. ET Friday between Port Aransas and Port O’Connor, Aransas County Sheriff Bill Mills said.
Callers to the local emergency dispatch line told of walls and roofs collapsing on people across the city, where an official had warned those who opted to stick out the storm to write their Social Security numbers on their arms for body identification.
Shortly after Harvey was downgraded to a tropical storm, with sustained winds of 70 mph, Saturday afternoon, Gov. Greg Abbott told reporters that he couldn’t confirm any fatalities. The state had more than 1,000 workers involved in search and rescue operations.
“There’s been widespread devastation,” Rockport Mayor Charles Wax told CNN late Saturday morning. No deaths had been confirmed, he said, noting that emergency workers were just beginning to go house to house to check on residents and assess damage.
“We’ve already taken a severe blow from the storm, but we’re anticipating another one when the flooding comes,” he said.
– Read the full story and very latest coverage from CNN Weather here